“I’m telling you guys there’s not enough radiation in those TV dinners to make somebody a walking night light.” – Edison

If you ever needed proof that Rotten Tomatoes is full of shit, this movie holds a 13 percent rating by critics on their site. Well, I guess that could also just be a damning stat for the film critic profession in general because it means that 13 percent of them liked this noxious turd.

That being said, at least this is better than The Pest but that’s not saying much.

Carrot Top, a man that somehow got famous for prop comedy, the worst discipline of all comedy, was given this as a vehicle to further his career and make him a superstar. It failed, quite gloriously. Luckily for Mr. Top, he was able to still sustain a pretty successful comedy career in Vegas.

I guess what’s most surprising about this film is that it actually has a lot of fairly well-known actors in it. I’d have to assume that none of them actually read the script or they somehow bought into Carrot Top being the next big thing in entertainment.

The story is just like every other story that sees some lovable loser inherit a corporation or a large sum of money from a stranger or person they met for five minutes. It makes sure to borrow every single trope that we’ve seen a dozen times in similar films but then it sort of just smears shit all over them.

But to be fair, Carrot Top showed some charisma, even if his material wasn’t funny. He didn’t write the script and I think this was just thrown into his lap with his agent yelling, “You’re fucking doing it!” Even though I’m not a fan of his regular work, I felt kind of bad for him as this material wasn’t made to work with anyone in his role.

I can’t call this a forgettable film as it is so bad that it will always haunt you. But at least it’s that type of bad that needs to be seen to be believed and its faults make it worthwhile if bad movies are your thing. I’ll probably never watch it again but I wouldn’t mind eventually seeing a Rifftrax version of the film. 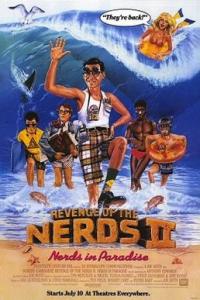 “There could be a nuclear war; there’d be nothing left but cockroaches and nerds.” – Roger

I wouldn’t say that this is a better movie than its predecessor but for some reason, I enjoy Nerds II more than I enjoy Nerds I. That could also be because of the fact that I was briefly on the set of this film when they were shooting the scenes at the front exterior of the hotel, which was the Embassy Suites in Fort Lauderdale, which wasn’t too far from my father’s house back then.

Another benefit of this movie is that it doesn’t feature any creepy behavior from the nerds. As I discussed in my review of the previous film, Louis raped a girl, filmed and broadcasted an entire girls’ dorm in their private moments and even hid in a girl’s shower to see her naked.

This film was also PG-13 and not R, so that probably had a lot to do with the lack of boobies and rape behavior. But being that this was PG-13 made it just a stoner comedy and not a teen sex comedy. However, by 1987, teen sex comedies had sort of run their course.

The plot for this film isn’t to dissimilar from its predecessor. The nerds have to rise to the challenges put in front of them by the jocks and the cool kids. The Alpha Betas return to be the villains but this is a new group where Ogre is the only returning member from the previous movie. The new group is lead by quintessential ’80s dickhead Bradley Whitford. I call him a “dickhead” but that was what he played a lot back then. He’s grown to become a pretty accomplished actor but I still remember him most fondly for his roles like the one here, Adventures In Babysitting and Billy Madison. He was superb in Get Out and I am really looking forward to seeing him in next year’s Godzilla sequel.

Most of the key nerds return for this film except for Brian Tochi. Also, Anthony Edwards wasn’t a fan of the script and even though he is in this, his role was significantly reduced to being a glorified cameo in a few scenes. Ted McGinley and John Goodman aren’t in this either, which kind of sucked but Whitford really carried the ball and ran with it.

We also get the addition of Courtney Thorne-Smith but she doesn’t have a lot to do other to to pine over Louis but nothing happens between them and Louis is still with Betty, the girl he raped into a relationship in the first movie. Louis and Betty are married by the time Nerds III rolled around.

So the main difference between this movie and Nerds I is that it is set in a “tropical paradise”: Fort Lauderdale. Also, the nerds are holed up in a really shitty hotel that has a boisterous Cuban lady and the legendary James Hong as a sort of zen master for Booger’s gross antics. Also, Ogre becomes a nerd by the end of the film. I actually kind of liked this bit, as Ogre doesn’t really fit in with the jocks, other than being used for his muscle power and intimidation.

Based off of the reviews and ratings I’ve seen for this film, it’s not as beloved as the original. But in all honesty, it’s not that bad if you are a fan of the first one.

Rating: 6.5/10
Pairs well with: The original Revenge of the Nerds but the sequels after this one get pretty terrible.