Well, this is probably the greatest string of Captain America issues that I have ever read. The first few were a bit shaky but they laid the groundwork for the start of the two primary stories, here, The Bloodstone Hunt and the Captain America portion of the Acts of Vengeance crossover and its fallout.

The Bloodstone Hunt was pretty incredible and a hell of a lot of fun. It was like an Indiana Jones story as Cap and Diamondback, now essentially his partner, raced against Baron Zemo, Batroc and their crew to try and hunt down five magic gems. It wasn’t clear why Zemo wanted them until the end, where he attempts to use them to resurrect his father, the original Zemo. However, he resurrects the powerful soul that was locked in those gems instead.

That story also features the debut of Crossbones and John Jameson (a.k.a. Man-Wolf) becoming Cap’s pilot. Sadly, we don’t get Man-Wolf action but this series of issues drops some hints that Jameson might not be able to suppress his cosmic werewolf alter ego for much longer.

After that, we get a two-issue arc that sees Cap and Crossbones fight for the first time. Man, I forgot how much I loved Crossbones in these early stories. He’s such a good sack of shit and a perfect rival for Cap. I really wish they would’ve used him better in the MCU movies, especially with Frank Grillo in that role.

Following that, we get the Acts of Vengeance stuff, which sees Cap have to fight Namor, his ally, as well as The Controller and Crossbones, again. There are also side plots about The Hellfire Club being raided and Magneto kidnapping and burying Red Skull alive in a tomb due to his ties to the Nazis, which a young Magneto and his family were victims of.

There’s just so much in this volume and all of it is damn good, once the story gets rolling.

Mark Gruenwald might be the best Captain America writer of them all. Additionally, the art throughout this stretch was superb. I still remember buying a lot of these single issues off of the racks, many of which I still own, and I remember loving back in 1989. I’m glad to say that this aged exceptionally well. 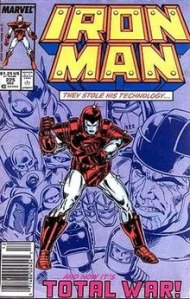 Good lord, it has been an incredibly long time since I read through this classic Iron Man story arc. Probably at least twenty-five years. But as I’ve been going through all my old comics in an effort to preserve them and catalog them, I wanted to revisit this old school tale.

Armor Wars, at the time of its printing, was referred to as Stark Wars, which was probably a cheap attempt at capitalizing off of Star Wars.

The story kicks off with Tony Stark finding out that his tech secrets have been stolen. He sets off to try to correct this, learning that his secrets have been sold off to a bunch of supervillains and tech industry rivals. This sets up a situation where Tony has to go rogue, deal with the consequences of those actions and also has to battle a bunch of his famous foes, who are now more enhanced thanks to Tony’s secrets.

Ultimately, this is a very well written comic book story arc for its time. To this day, this is still considered one of the best Iron Man stories of all-time. It is certainly one of my favorites and when I was a kid, it really served to introduce me to a lot of Iron Man’s famous villains. This is where I first discovered the Crimson Dynamo, Titanium Man, the Controller and a few others. I was already a fan of Beetle from his appearances in Spider-Man stories.

This story also features the West Coast Avengers, who had one of the coolest comics in the late ’80s.

One of the biggest highlights, however, was that this has a chapter where Iron Man fights Captain America. This happened a few decades before the Civil War storyline in the comics and was the first time that I remember seeing two heroes really throw down with each other without one being controlled by some villain or being corrupted by some sort of power or force.

Apart from the Iron Man and Captain America fight, I loved the chapter that saw Tony Stark go head to head with both the Titanium Man and the Crimson Dynamo at the same time. This was just a great comic, even as a stand alone and not a chapter in a larger story arc.

This is still one of the greatest Iron Man tales ever written. I thought that the conclusion was a bit anticlimactic but it was an ending that still worked and ushered in a new era for Tony Stark and his friends.

Rating: 8.5/10
Pairs well with: Other classic Iron Man story arcs: Demon In A Bottle, Doomquest, 10 Rings to Rule the World, Iron Monger, The Ghost and the Machine and The Dragon Seed Saga. Also, Armor Wars II.