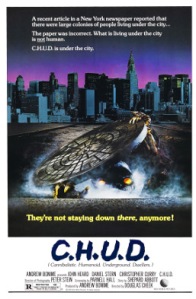 “Are you kidding? Your guy’s got a camera. Mine’s got a flamethrower.” – Captain Bosch

This was the first film featured on the full-time revival of Joe Bob Briggs on television. I’m talking about his show The Last Drive-In, which is now streaming weekly on Shudder.

But like Joe Bob, I’m apparently one of the few that isn’t too fond of this motion picture. It’s not really bad but it’s pretty damn dull for about 80 percent of its running time and there are so many better movies from the era. This is probably why I haven’t reviewed this yet, as I just didn’t have the urge to revisit this, even for review purposes.

In all honesty, I prefer the sequel more. Yes, it’s actually a worse movie but it’s batshit insane and pretty much a black comedy spunoff from the C.H.U.D. concept.

People have been asking me for my opinion on this movie for quite awhile, though. So I guess a review is overdue and if Joe Bob can sit through it again, I guess I can too.

It’s still dull as shit. But it does have several known stars in it to at least distract me from my boredom enough to get through this.

On the flip side of that though, I do like the scenes that feature the actual creature or some of the gore it’s responsible for. I also like the idea for the film, I just thought that this spent too much time boffining it up and not enough time spent on cool monsters eating dumb people.

The performances can be a bit over the top but not so much so that I’d call the acting bad. And at least the performances provide some energy where the story fails to do so.

It may sound like I’m a hater, I’m not. But I’m certainly not a lover of C.H.U.D. I understand that a lot of people have a nostalgic soft spot for the movie but it didn’t really resonate with me as a kid, even though I pretty much lived in ’80s video stores and loved the horror genre tremendously.