So Michael Myers obviously isn’t dead but this time around, he just wears a large hooded trenchcoat and looks nothing like the character that has been burned into the public’s psyche for three decades, upon this movie’s release. In fact, he looks more like Tyler Mane’s other most famous role, Sabretooth from 2000’s X-Men. Granted, he does wear the famous Myers mask but it barely matters as the rest of his look is so drastically different.

Anyway, I remember when this came out and people were like, “Oh, yes! Now that the ‘remake’ is done, Rob Zombie can give us his vision of what Halloween should be!” Seriously, you people wanted to see Zombie’s full take on these characters after his diarrhea-brained alterations to the original film?

So here we are, dipshits, as Rob Zombie fumbles the ball harder than a drunk Browns player with the flu in a Superbowl-clinching game.

What’s the problem? Well, this is basically more of the same with a heavy emphasis on all the bad shit that wrecked the previous film. Also, Loomis is stripped down and made into a terribly shitty character.

The absolutely worst thing, though, was Rob Zombie bringing his wife back as a fucking ghost lady with a white horse and the ghost of little Michael even though big Michael is still alive. I can only imagine that this was done because god forbid Zombie doesn’t give his wife a job. In this movie, though, she solidified what I’ve always known and that’s the fact that she’s an atrocious actress. She legitimately makes Zombie’s movies worse just by being in them.

Additionally, I was kind of indifferent to Scout Taylor-Compton’s vanilla interpretation of Laurie Strode but by the end of this movie, I hated her too.

At the end of the day, fuck this movie and fuck Rob Zombie.

“[raises palm to cashier] Talk to the hand.” – Terminator

I saw this the night it came out, back in 2003. It was a massive disappointment and thus, I’ve never gone back and watched it again until now. But this film is really where the Terminator franchise completely went off the rails and honestly, it has never recovered, except for the too brief television show that ended on a cliffhanger.

Out of all the sequels, I think that this one is the worst. Genisys actually had a worse story but Schwarzenegger was really enjoyable in that one and kind of saved it from being complete and utter shit. In this one, however, his humor and attempts at one-liners are so fucking cringe that it drags a somewhat better story way down into the mud.

For positives, I think there’s really just one: Nick Stahl. I’m not sure what the critical and fan consensus is on his performance as John Connor (I’d assume it’s not good) but I actually thought he did fairly well for having a terrible script to work with and being a last minute replacement for Edward Furlong, who couldn’t return due to his drug abuse issues at the time.

Beyond that, Claire Danes is terrible in this and Kristanna Loken looked great but was so boring she pulls you out of the film.

One could say, “Well, Robert Patrick wasn’t exciting in T2.” But those people would be wrong. Just because an actor has to play an emotional robot of a character, doesn’t mean that they have to be a generic blank slate, tilting their head like a dog that heard a high pitch sound. Patrick in T2 and Schwarzenegger in T1 both knew how to move and how to act in order to come across as a soulless predator. It was in their body language, their facial expressions and the way they hunted their targets. To be fair, I don’t necessarily blame Loken, I blame the director for not seeing this and fine tuning her performance to live up to the standard set before her.

While I like the idea that Armageddon is inevitable, as this film strongly implies throughout the entirety of its story, I want to know why. It never tells us why. It just has Schwarzenegger randomly say, “You just delayed Armageddon; Armageddon is inevitable.” Well, why does he say that or think that? What does he know that makes this a fact? There’s a story there that could’ve enriched the bigger picture here but it’s just a repeated throwaway line that we just have to accept and go, “M’kay, sure… that makes sense.”

The most important thing working against this film isn’t any of the stuff I’ve already mentioned, it’s the fact that this is just really fucking boring. It doesn’t matter that the Terminator uses one-liners that were already out of date by 2003 or that the Loken Terminator doesn’t make a lot of sense and she’s overpowered for the sake of being overpowered. This is just a dreadfully boring piece of shit.

It’s not competent, it feels incredibly generic and there’s nothing in the film that is memorable. There’s no great action sequence that you will care to remember like many of the great sequences from the first two films. I guess the biggest one I remember is the car chase with the crane truck and remote control police cars but I was more annoyed by it than impressed.

The whole film felt as soulless as Loken’s Terminator.

But at least it’s less than two hours.

Side note: I thought the closing moments in the underground bunker were actually kind of good and somewhat chilling.

Rating: 5/10
Pairs well with: the other shitty Terminator movies that followed.

After watching the beefy but solid Star Wars documentary Empire of Dreams, I noticed that Disney+ also featured a similar made-for-TV documentary about the making of the Marvel Cinematic Universe. I figured I’d check it out, as it originally aired in 2014, on the cusp of the MCU reaching its peak.

Unfortunately, this isn’t as compelling as Empire of Dreams and it plays more like a Marvel produced production used mainly to pimp themselves out and market Captain America: Winter Solider and the Agents of S.H.I.E.L.D. TV show. But I get it, this played on ABC, which like Marvel, is owned by Disney.

It’s still an informative piece with a lot of insight into the making of the first Iron Man movie, which opened the floodgates for the rest of the MCU.

The best part about this short feature is the interviews with the stars and filmmakers who helped bring this universe to life. I especially liked hearing the enthusiasm that Robert Downey Jr., Scarlett Johansson, Gwyneth Paltrow and Jon Favreau had with the early Iron Man pictures.

Overall, this isn’t a must watch but it’s worth your time if you are a big MCU fan.

Rating: 7/10
Pairs well with: other filmmaking documentaries about blockbusters. Empire of Dreams, immediately comes to mind. 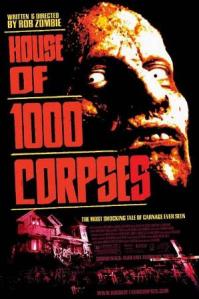 “Goddamn, motherfucker got blood all over my best clown suit.” – Captain Spaulding

House of 1000 Corpses was a movie that was highly anticipated before it came out, as everyone wanted to see what Rob Zombie could do as a legit film director. I remember there being delays and it felt as if this was never going to come out and when it did, it didn’t show up in my town and was sort of sparsely released unless you happened to live in a big city. I had to wait for the DVD to drop, six months later.

For the most part, Zombie did not disappoint with his debut and while it was a strong homage to films in the vein of the Texas Chainsaw Massacre franchise, it was still very much a part of Rob Zombie in style.

Although, it mostly feels like a really long music video littered with gore and deplorable actions. Not that that is a bad thing but it sort of limits the film’s audience and narrative, as the film’s style is put in front of everything else.

House of 1000 Corpses works for what it is, even if some of the stuff is really outlandish. This style wouldn’t work as well for Zombie going forward, as all of his films after his second one are pretty awful. His overemphasis on highlighting white trash and gross shit really wears thin after The Devil’s Rejects, the only sequel to this picture.

In fact, I grew to dislike Zombie’s work so much that I hadn’t sat down and watched this movie in years. I’m glad I revisited it but I see more flaws in it now than I initially did a decade and a half ago. But it is cool seeing this ensemble cast of a lot of talented people, many of which are horror icons, playing off of each other.

Also, Zombie’s wife, who he casts in every film, hadn’t grown tiresome and grating yet. After The Devil’s Rejects she would become as unwelcome on the screen as her husband as a director.

The real highlights of this film is the amazing work of Sid Haig, who isn’t in it enough, and the role played by Bill Moseley, which is really a retread of his more famous character Chop Top from The Texas Chainsaw Massacre 2.