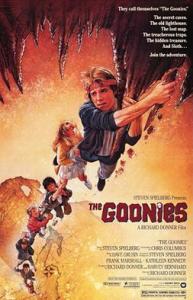 “Don’t you realize? The next time you see sky, it’ll be over another town. The next time you take a test, it’ll be in some other school. Our parents, they want the best of stuff for us. But right now, they got to do what’s right for them. Because it’s their time. Their time! Up there! Down here, it’s our time. It’s our time down here. That’s all over the second we ride up Troy’s bucket.” – Mikey

Cyndi Lauper sang that the “Goonies ‘r’ good enough” and frankly, I have to agree with her.

This is a perfect movie for kids… and adults, really. It’s fun, funny, full of adventure, danger, treasure, good feelings, friendship, imagination, wonderment and a bit of swashbuckling.

On top of that, every single person in the cast is absolutely perfect, top to bottom. This was just a special movie where everything seemed to go right, especially in regards to the actors chosen for each specific role.

Every kid in this is great and they had spectacular chemistry. You believed that they were all friends and it was impossible not to root for them. With the Fratellis, you had another group that worked damn well together. Honestly, as a kid I kind of wanted a Fratelli spinoff movie. Sadly, Anne Ramsey died a few years after this but I’ve always wanted to see Robert Davi and Joe Pantoliano come together as gangster brothers again.

Apart from the casting, you had a wonderful script penned by Chris Columbus from a story written by Steven Spielberg. With Richard Donner directing, it’s kind of hard to imagine this failing, even before seeing the picture.

It’s very rare that I come across someone that hasn’t seen the film. It’s reputation precedes it and for good reason. It has stood the test of time and it’s not something that loses steam the more you watch it. In fact, at least for me, it’s a film that I appreciate more with every viewing. It’s hard to peg as to why that is but man, it’s a film that just brings you to a special place; it’s magical and it is full of optimism when most entertainment, at least in modern times, is pretty nihilistic.

The Goonies gives one hope because it is exactly what entertainment needs to be, pleasant and enjoyable escapism that leaves you with a positive feeling despite whatever crap your day threw at you.

It’s perfectly paced, there isn’t a dull moment and every frame of the film… hell, every line spoken, has a purpose and has real meaning behind it.

The Goonies also benefits from its stupendous score by Dave Grusin, a guy who isn’t as well known as John Williams, James Horner or Alan Silvestri but was still able to create a theme and a score that was good enough to rival the best work of those three great film composers.

For what it is, The Goonies is absolutely perfect. If you don’t like it, you probably aren’t human or at least don’t have a heart.

Rating: 10/10
Pairs well with: The Monster Squad, E.T. the Extra-Terrestrial and The Explorers. 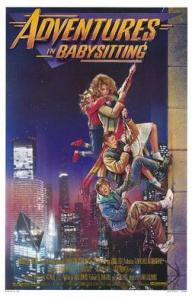 Adventures In Babysitting was one of those movies I watched a heck of a lot as a kid in the ’80s. It was just a cool movie and being that I was around the same age as the youngest kid in the film, who was also a massive Thor fan, it was easy to relate to the characters. Plus, my family are all originally from Chicago and I used to go up there all the time in my youth. I love that city and this really captures it in a very ’80s way, which was also how I first experienced Chicago.

I think the real glue of this picture is Elisabeth Shue. She was perfect as the lead and believable in the situations she found herself in. I guess the studio wanted Molly Ringwald or Valerie Bertinelli but Shue landed the role and I can’t quite see how this movie would work the same way with those other actresses. The character of Chris felt very much like Shue.

The kids in the film were also well cast. You had Keith Coogan and Anthony Rapp, both at the beginning of their careers, and Maia Brewton, who was solid and the most fun and energetic character in the movie. I also love all the bits Penelope Ann Miller did at the bus station, even though she was on her own and separated from the other kids throughout the vast majority of the picture. And even though he’s only in two scenes, Bradley Whitford played his ’80s douchebag role to perfection in this.

The premise sees these kids go into Chicago to pick up Chris’ friend, who has run away from home and is stranded at an inner city bus station. On their way into downtown Chicago, they blow out their tire. They get saved by a nice tow truck driver but then things go absolutely nuts and the kids get mixed up with an auto theft ring ran by some shady dudes. The rest of the film sees them running through Chicago, dodging the gangsters and constantly getting into wild situations. It almost plays like an urban Goonies without treasure. Additionally, the end has the kids racing home to beat the parents in a similar fashion to Ferris Beuller but without the cool musical montage of Ferris running through people’s yards and houses.

This was also the first film directed by Chris Columbus, who had written some very successful films before landing this gig.

Like all ’80s teen films, this is certainly dated. However, it hasn’t lost its charm or any of the excitement. It has held up really well and isn’t just good when seen through nostalgic eyes, it is just a film that works and is still a blast.

Rating: 7.5/10
Pairs well with: For an Elisabeth Shue pairing, watch The Karate Kid. For Keith Coogan and a babysitting theme, Don’t Tell Mom the Babysitter’s Dead. If you want to see more of Bradley Whitford being an ’80s prick, Revenge of the Nerds II: Nerds In Paradise.

The Gremlins film series is proof that America wasn’t ruled by overprotective helicopter parents in the 80s. I’m glad I grew up in that era, as opposed to nowadays when a good old family film like Gremlins would be severely toned down and edited or have to be rated R and thus, not a family film.

I saw it in the theater with my parents. I was five. Yes, I saw people killed by little monsters and a bunch of horror violence but guess what? I loved it because I wasn’t coddled into being a complete wuss.

So let me discuss these films that, by today’s standards, should have destroyed me and turned me into a budding serial killer.

The first one is the best one. It is a classic and a “must view” film come Christmas time, even though it oddly came out in the summer months of 1984.

Gremlins is a prefect balance of comedy, horror and holiday cheer. It also is a perfect balance of cuteness and insanity and I’m not talking about the very young Corey Feldman in this picture.

The creature effects are top notch for their time and I would still rather watch these animatronic puppets than CGI any day. And one can’t not be impressed with how many Gremlins they actually put in some of these scenes. In the movie theater segment alone, it looks as if there are dozens of these creatures, all controlled and animated by some off-screen puppeteer.

The story is pretty basic and straightforward but most fairy tales are. But this is a dark and amusing fairy tale. The Gremlins, for being terrifying little monsters are hilarious. They joke around, act crazy and are lethal, even to each other. The fairy tale also has its rules that must be followed. Of course, the rules aren’t followed and that is why we end up with the glorious chaos that is this film.

Zach Galligan and Phoebe Cates are perfect as the leads in this film and they had great chemistry, which also worked well in the sequel. In fact, unlike other boys my age, this is the film where I got a huge crush on Phoebe Cates, as opposed to Fast Times At Ridgemont High. Hoyt Axton was entertaining as the father character, a struggling inventor whose gadgets are the butt of several jokes in the films. Judge Reinhold and Dick Miller both show up for a bit as well.

This was one of my favorite movies when I was a kid and it has aged well. It still exudes the magic I found in it as a five year-old in the theater. Yeah, it is cheesy and over the top but it has a grittiness to it that you will never get when this film is eventually remade.

Gremlins is great. It is some of Joe Dante’s best work as a director.

And the soundtrack is fantastically nuts.

The New Batch is a pretty satisfactory sequel. I feel like they took too much time off between films but it still has a lot of the spirit of the original. It was also cool to see Zach Galligan and Phoebe Cates return, as well as Dick Miller.

The film also has Christopher Lee in it, one of my favorite actors ever, as a mad scientist who does zany experiments on animals. His carelessness leads to the Gremlins acquiring some extraordinary abilities and a few bizarre abilities. The inclusion of Christopher Lee’s character ups the ante in this film, making the Gremlins more of a serious threat than they were in the first movie.

Also joining the cast are John Glover, as Daniel Clamp (a parody of Donald Trump in the 80s), Robert Picardo (a regular collaborator with Joe Dante) and Robert Prosky (as a late night horror movie show host dressed like a vampire). All three of these guys give superb performances, especially Glover.

Gremlins 2 isn’t as good of a film as the first but overall, it might be more fun. It is less dark but it is more campy. It has more Gremlin gags as opposed to a straightforward fluid story. The plot exists and there is a beginning and an end but the in-between stuff plays more like sketch comedy with a few plot points added in to keep it somewhat coherent.

This is a very different film than the first, which is refreshing. I probably wouldn’t want a rehash of what was done previously. This film did a great job of being its own thing while continuing the story on from the original.

I had always hoped for a third and final film but that ship has most likely sailed and Joe Dante isn’t the same director anymore. 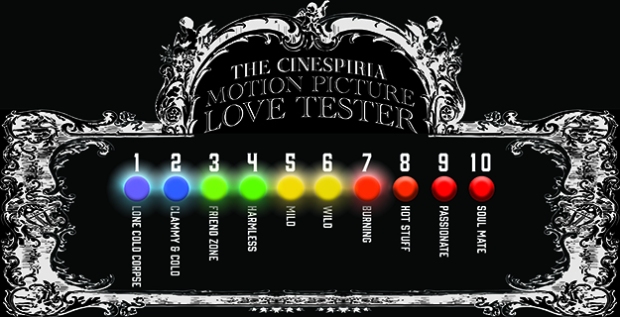