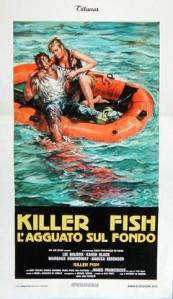 I have watched so many Jaws and Piranha ripoffs over the years that I’m surprised that I had never seen this one or heard of it. Also, the fact that this stars Lee Majors, Karen Black and one of the Hemingway sisters, makes my lack of knowledge about this film even stranger. But it was featured on the latest season of Mystery Science theater 3000, so I had to give it a watch. Plus, I love killer animal movies regardless of them taking place on the water, on land or in the air.

As is the case with most films like this, it’s a real stinker. It also lacks anything to redeem it. Even with a few people I like in the cast, they didn’t do much to help the picture and looked as if they were just collecting a paycheck and trying to rush through this.

It was produced by Lee Majors production company with his wife at the time, Farrah Fawcett. That being said, it’s surprising that he didn’t seem to care much about the quality of his own product.

While this does deal with killer piranhas, they never feel as threatening as the killer fish from Joe Dante’s Piranha, a year earlier. Additionally, the footage and effects of the piranha attacks are pretty shitty.

The one thing that makes this not a direct ripoff of Dante’s classic, is that this is also a heist film. Well, sort of. There isn’t much about the actual heist here, it is just used as a plot device to get the characters to try and turn on each other while trapped on a broken boat surrounded by man eating fishies.

This is far from great and barely entertaining. It’s the kind of bad that is really boring and not actually enjoyable for being terrible. It’s just a total dud. But it also isn’t so bad that I can completely trash it. It’s just well below mediocre, unexciting, uneventful and given no real life by the talent of its top stars.

Rating: 3.75/10
Pairs well with: other Jaws and Piranha ripoffs of the era.

“We rip out so much of ourselves to be cured of things faster than we should that we go bankrupt by the age of thirty and have less to offer each time we start with someone new. But to make yourself feel nothing so as not to feel anything – what a waste!” – Mr. Perlman

I didn’t get to see this in the theater, where I intended to check it out. It wasn’t the highest on my list of “awards worthy” films last year and I had a big list to work through. Plus, I’m not in an area where “awards worthy” films are looked at as all that important. But hey, everyone around here is really excited for that Bumblebee movie.

Anyway, I finally caught this on the Starz app, it’s still there, if you’ve been wanting to see this highly lauded motion picture.

The film is about an American named Oliver (Armie Hammer) that comes to live with an Italian family for the summer. The son, Elio (Timothée Chalamet), quickly develops a crush on Oliver. As the film progresses, Elio’s feelings towards Oliver are found to be mutual and we go along with him on his journey of self-discovery: trying to understand what attracts him, what love is and how to deal with the overwhelming emotions of being a passionate young man.

The film is heartbreaking at its lowest emotional moments and not just for Elio but for a few characters. At the same time, there’s hope and positivity in Elio learning to accept and find comfort in who he is. Luckily for him, he has loving and understanding parents. And while this does end on a sad note, I guess there’s a sequel in the works for some reason, even though it really isn’t necessary and sort of takes the impact away from the ending, knowing that these two characters will meet again.

The framework of an uncertain future is pretty much what makes the final moments work. And yeah, I guess the future is still uncertain but this takes some of the story magic away. Besides, I had incredibly strong feeling for the first few people I had sex with but at 39 years-old, I’ve moved on a half dozen times. That’s what life does, it moves on, you meet new people and what was once intense emotional pain was just something that happened lifetimes ago. Elio should never forget the experience but he also shouldn’t be crippled by it as life moves forward.

I thought that both Armie Hammer and Timothée Chalamet did a fantastic job. However, I thought their physical age differences, at least how they appeared in the film, were pretty drastic. Oliver is supposed to be 24 in the story but Hammer looks over 30. Elio is 17, which is well over the age of consent in Italy, but he looks 15. 7 years isn’t a big deal and Elio being 17 probably only seems weird in the U.S., where some states have the age of consent set at 18 and where the media is pedo crazy and we obsess over sex offenders. But in the film, the age difference looks greater than the original story intends. And I don’t think that their ages are actually mentioned in the film. It’s really not a big deal but Hammer looked much older than just being some college student living abroad for a few months.

The film moves kind of slow but it’s still well put together and it at least looks beautiful. Luca Guadagnino certainly has an eye for style and understands how to make his visuals a true accent to the narrative and the emotion unfolding on screen. While I was vehemently against anyone remaking Suspiria, I’m kind of intrigued by his vision for it after seeing this film and seeing the trailer for that film. I’m hoping that Guadagnino uses the same key crew members for that film, as this picture is so rich, visually.

In the end, I enjoyed this but it isn’t something I think I’d ever watch again. It looks beautiful, it told a good story but I feel it is also overblown due to its subject matter, which is the type of thing Hollywood snobs love because their progressive nature means that they have to push those politics and ideas into the mainstream. Which honestly, distracts from this just being a really good movie and just makes it one of many films that Hollywood has to prop up to prove that they’re not bigots anymore. But a lot of them are pedos and this doesn’t help that image, just sayin’.

Again, this is a good film. Picture of the Year nominee? Not really. But then again, most of the films that get that distinction aren’t worthy. Now if Timothée Chalamet fucked a fish man, this would have won all the big ones. Bestiality trumped gay sex this past year but gay bestiality would’ve broke the Academy.