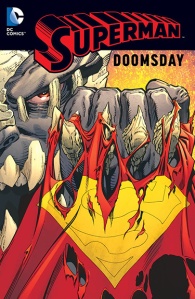 Well, Superman is already alive and we’ve reached the fifth and final part of the Death/Return of Superman saga. With that, this story takes care of the last thing that needs to be dealt with and that’s Superman finally defeating Doomsday without dying and thus, restoring balance the the DC universe.

Generally, I like Dan Jurgens writing but overall, I wasn’t blown away by this saga. However, I did find this to be better than all the big DC Comics Crisis events, which always read like overloaded, convoluted messes to me.

While these stories had a lot of characters in them, Superman was always really the focus and for the most part, this stayed on that thread, even if there were some distractions with new “Supermen” and with checking in on individuals after Superman’s death.

I felt like the art, here, was a bit more fine-tuned and better than the rest of the chapters in this massive saga.

Additionally, the writing felt tighter and more focused, as Jurgens pretty much handled it all and the work wasn’t spread out over a handful of people.

The highlights of this are that Superman is definitely back, we get to see Darkseid mix it up with Doomsday, Cyborg Superman cements his place as a major villain, and Doomsday finally gets some receipts cashed in on his ass.

In the end, I’m glad that I finally experienced this saga in its entirety. It was long but by the end, the total body of work made all of the smaller parts come together, giving them deeper meaning and relevance to the overall DC universe. 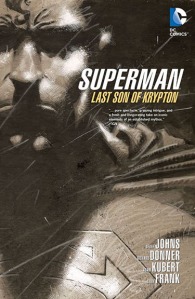 I wanted to read this because it was the first official comic book appearance of General Zod, the made-for-the-big-screen villain from the first two Superman movies by Richard Donner.

What makes this even cooler is that Donner worked on this story with Geoff Johns.

This collection is actually two separate stories. However, they both feature Zod with the first one being primarily about the character and his introduction into DC Comics canon. The second story primarily features Brainiac as the antagonist.

Ultimately, this was a really good read and one of my favorite Superman trade paperbacks of recent memory. Both stories were solid and they actually connect in a way that makes wedging both of them together, a more enjoyable, overall narrative.

I thought that Donner and Johns came up with a pretty satisfying story to introduce Zod and his family. I also thought that the Adam Kubert art was top notch but I’ve also always loved all the Kuberts.

If you grew up with the two Donner Superman films like I did, this should definitely peak your interest. It’s a worthwhile story that was both engaging and entertaining while also being a great homage to Donner’s Superman film work. 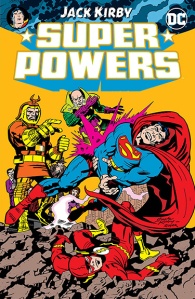 When I was a kid and super into G.I. Joe and Transformers, my cousin Billy was super into Super Powers and Marvel’s Secret Wars action figures. In a lot of ways, those two toylines were my introduction to many of the comic book heroes and villains outside of what a six year-old would know.

Playing with Billy’s toys and playsets, I was pretty captivated by them and it is probably a major factor in what got me to read superhero comics, as opposed to just G.I. Joe, Transformers and Star Wars.

I never read either of the two Super Powers miniseries, however, so I was pretty excited to pick this up. Also, since this was primarily done by the legendary Jack Kirby, I thought that reading this was long overdue and that not having read this sooner was a major crime against my own soul.

This edition collects both of the miniseries, the first being five issues and the second being six.

Overall, this is a really fun time and other than Mister Miracle, it’s my favorite stuff that Kirby has done for DC. Essentially, this is Kirby writing and drawing the Justice League. It features many of the core League members while also using some of their main villains.

While Frank Miller and Alan Moore would drastically alter the tone at DC, just after Kirby’s Super Powers, this is a nice contrast to what DC became synonymous with in that decade. 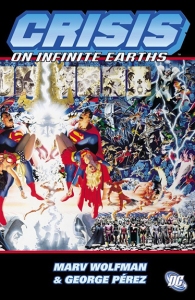 Crisis On Infinite Earths is one of DC Comics’ sacred cows. Yet, I’ve never had much urge to read it because my experience reading massive DC Comics crossovers has never been that great.

But now I have read it because I felt like it was long overdue and because this is a storyline that is referenced a lot, still to this day, thirty-five years later.

The first problem with this story might be apparent by the number of tags at the top of this post. It’s overloaded with so many characters that it is mostly a convoluted clusterfuck of biblical proportions.

In fact, this post may be the record holder for the number of tags I had to add to it. And frankly, that’s not all the characters, just the ones I know because two-thirds of the characters here are generic one-offs or so minute to the DC universe that they aren’t worth noting.

Now I know that some people love the splash pages from this series, as they showcase dozens (if not over a hundred) different characters all in one giant image. If I’m being honest, I’ve always disliked them and they are why I never really wanted to read this. Most of the action is minimal and many of these scenes are just characters standing around. They lack the energy that a splash page needs and look more like they belong in a Where’s Waldo? book. And I don’t say that to come off as a dick because I almost always love George Perez’s art. This just seems like DC management telling Perez to squeeze in as many characters as artistically possible. It’s hard on the eyes and it’s shit.

Another big problem with this twelve issue story arc is that every moment feels larger than life. Well, when everything is so big and grandiose, that becomes normal and status quo. You can’t possibly go bigger and with everything being so big from start to finish, none of it is memorable. It’s just a busy, stressful read without allowing the reader to catch their breath and reflect on what’s happened. It’s kind of like a Michael Bay movie. Throw so much intense shit at the audience, don’t let them stop and think and they’ll just move from point A to point B to point C and so on, forgetting everything that happened two points prior.

This event was made in an effort to sort of reset the DC universe. Honestly, all it does is make a giant fucking mess of things and splatters the mess all over everything it touches.

The plot doesn’t make sense, I’m not sure what exactly changed and with so many universes crashing together into one, it’s not properly organized and then re-established in any sort of way that a reader can follow. If this was supposed to be a jumping on point for readers in 1986, I don’t know how they made sense out of any of it and then knew which characters to follow.

The main reason for the previous sentence is that this is so overloaded with people that you don’t get to really know any of them. There is no character development and this is written in a way that it assumes the reader knows all about every character in the story. For a seasoned comic book reader like myself, who has been reading comics for three and a half decades, I was lost and didn’t know who half of the low tier characters were.

Crisis On Infinite Earths should have been written as a Justice League story with some inclusion of the Fawcett Comics characters and the Golden Age DC heroes. All the third tier and lower characters could have made cameos but even then, they don’t really need to.

I really hoped that this was going to pleasantly surprise me but it hurt my head.

It was too much, too big and too long.

Rating: 4/10
Pairs well with: mid-’80s DC Comics titles, as well as all the other massive DC crossover events. 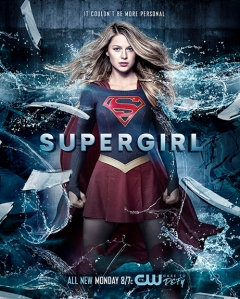 After the success of other DC shows like Arrow, The Flash and Gotham, CBS wanted to get into the mix. So, they gave us Supergirl.

I really wanted to like this show, in the same way I love The Flash and also really like Arrow. It seemed to have that lighthearted essence of The Flash but after seeing it, it is missing the soul.

Melissa Benoist is cute and entertaining and even though I care about her version of the character to a degree, I just don’t care about everything else that is happening around her. Also, she can go from pretty stellar acting in one scene to completely being off the mark in the next. Also, her narration is pretty awful and that is mainly due to her monotone delivery and strange annunciation.

The other characters on the show are pretty generic and don’t have much to do other than giving Supergirl someone to talk to while she figures out her own drama. Her sister, played by Chyler Leigh is an okay character but for as bad ass as she is supposed to be, she really does nothing. Jimmy Olsen is played by Eggs from True Blood and anyone who was a fan of that show rejoiced when he died – he was terrible. Granted, he’s much better here. Calista Flockhart also accents the show as Supergirl’s boss and like Benoist, is sometimes on point and other times, pretty far off point.

Also, the show relies a lot on Kara/Supergirl’s relationship with her cousin, Superman. The problem is that their relationship is told over text messages and then when Superman shows up, he is just an obscured blur and not clearly seen on camera. It is laughably bad.

One cool thing is that Dean Cain (Superman from Lois & Clark) and Helen Slater (1984’s film version of Supergirl) play her adopted parents.

The show tries to have heart but it doesn’t. That doesn’t mean that it isn’t trying to convince the audience of that. Ultimately, Supergirl is too cutesy for its own good.

I will finish out the first season, as I am already more than halfway but something miraculous would have to happen for me to care about season two. This is the worst DC Comics television show out of the current batch.

Since writing this review, the show has found its groove and it has improved significantly. I may rewrite this review after the season concludes. But if you want to start watching it, be prepared for about ten really mediocre episodes before it starts to improve.

I write this update after completing two seasons. The show does find its footing, it figures out where it fits in the scheme of things and improves drastically, especially after leaving CBS and moving over to the CW where it shares continuity with The Flash, Arrow and Legends of Tomorrow. Benoist and the rest of the cast get really good and develop a solid chemistry. Looking back, I was probably too hard on the show, initially.