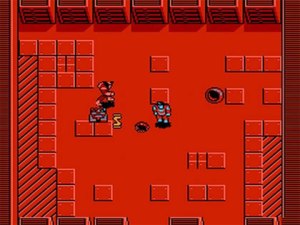 I remember how excited I was blowing my Christmas money on this game at Toys”R”Us, the year it came out.

Then I remember how depressed I was after playing it for two minutes, once I traveled an hour back home with my mind set on conquering the Brotherhood of Evil Mutants.

This game is absolute shit. It’s one of the worst video games I have ever played. It’s certainly the one that pissed me off the most after spending my own money on it back before I was old enough to even work.

Everything about this game is complete trash.
-The graphics
-The mechanics
-The controls
-The level design
-The generic, asshole enemies
-The sound
-The garish colors
-The second character’s AI
–EVERYTHING

I figured I’d play it again, for the first time in decades, to see if maybe I overreacted back in the day. Nope. This is still, hands down, the worst original Nintendo game that I personally paid for.

At least those Sega Genesis X-Men games kind of made up for this one.

I recently revisited and reviewed one of my favorite miniseries in my youth, The Deadly Foes of Spider-Man. I was pretty impressed by it and so I wanted to read its sequel, which I missed when I was a kid.

Unfortunately, this one is a much weaker miniseries.

I think the biggest reason for that was because this one was just overloaded with characters, the villains weren’t really unified at any point and it was more like a Royal Rumble than a story about Spider-Man having to overcome a team of enemies with the objective of defeating the hero through shear numbers.

This picks up some of the plot threads from the previous story but honestly, everything seemed pretty much resolved already. Adding on to those stories didn’t really generate anything meaningful or that interesting.

I really liked the Sinister Syndicate team from Deadly Foes but only half of them returned and then we had other villains kind of randomly thrown in.

The story wasn’t necessarily hard to follow but it was a mess.

I’m not sure what went wrong but trying to do too much for the sake of simply upping the ante isn’t really a good approach. 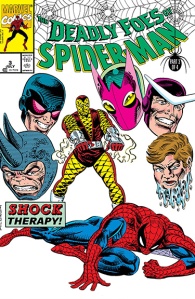 I loved this series when it came out in 1991. My sixth grade friends and I couldn’t stop talking about it and we all thought the idea of the Sinister Syndicate was pretty cool, as they were a sort of B-level Sinister Six full of Spider-Man villains that usually don’t get as much airplay as the A-level baddies.

I wasn’t sure what to expect, reading this thirty years later, but I have to say that I was more than pleasantly surprised. This was a great story with a ton of twists, turns and backstabbery. The villains could barely get along enough to pull off one heist, so seeing them all play against one another was entertaining as hell. Each villain had their own objective and pretty quickly, those solo objectives created real friction.

This also has a few subplots that worked great.

To start, the deceased Ringer’s girlfriend is a part of the gang, as a getaway driver. However, she has revenge plans of her own and it’s neat seeing them unfold, as she sort of plays a classic femme fatale.

Also, The Kingpin gets involved and starts pulling some strings for his own reason. He adds to the chaos in a great way and plays everyone like pawns. Well, that is until a certain character surprisingly outwits him.

I liked the subplot about The Shocker too. He’s not officially in the Sinister Syndicate but he weaves in and out of the story while dealing with his overwhelming fear of Spider-Man, The Scourge and The Punisher.

After revisiting this and loving it so much, I think I’m going to delve into its sequel soon, The Lethal Foes of Spider-Man. That one, I haven’t actually read. 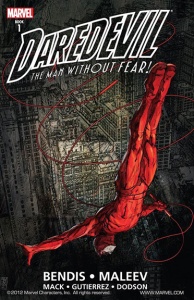 Following the Guardian Devil and Parts of a Hole storylines, Brian Michael Bendis began his Daredevil run. While I had read much of this twenty or so years ago, I had forgotten just how good it was and that Bendis was once an exceptional comic book writer when he still obviously had the passion burning inside of himself.

This big collection of multiple story arcs didn’t have any weak parts to it.

The first story dealt with a young kid going through some serious trauma after witnessing a fight between his father and Daredevil, which left his father dead. While Daredevil was a minor character in his own story, something I tend to hate, I excused it here, as the four issue arc was so solid and brought a lot of emotion into the series to kickoff Bendis’ run. Plus, it featured Ben Urich as the main character and I’ve always loved that guy.

Following that, we get a few arcs that are really connected as one larger narrative. We see the Kingpin get taken out by a new guy in his organization’s ranks. This new guy tries to take Kingpin’s spot but ultimately pays a price for it courtesy of Vanessa Fisk, Kingpin’s wife, who has been absent for years.

Additionally, this wannabe Kingpin discovers Daredevil’s identity and with that, the world soon finds out. Matt Murdock with several of his allies has to try and fix this problem, convincing the world, somehow, that Murdock is not the masked vigilante.

All in all, this beefy volume is packed full of absolute greatness. Add in Alex Maleev’s incredible art and you’ve got one of the best Daredevil collections ever printed: a near perfect masterpiece.

Rating: 9.5/10
Pairs well with: the other Daredevil comics from his Marvel Knights run. 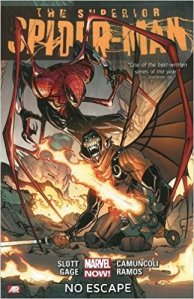 I have been surprised by this series. I wasn’t too keen on the premise and I thought it was way too bizarre to work and was just a shitty attempt at shocking audiences, creating controversy and attempting a cash grab. I mean, it was exactly that but the story, once you move past the absurdity of it, is pretty damn good.

Also, each volume I read is a bit better than the previous one. This gets right into some action and is actually two stories collected into one volume: each story being solid, action packed and fun.

I love this character and how it is such a drastic departure from the Peter Parker Spider-Man. He is a super intelligent vigilante that blackmails the mayor (J. Jonah Jameson, mind you) into supporting his cause publicly and financially (on the city’s dime).

The first story sees Spider-Man take on the Spider Slayer, Vulture, Boomerang and Scorpion on the island prison, the Raft. Obviously, he succeeds but then forces the mayor to give him the Raft to use as his headquarters for his technological war on crime. Spider-Man also gets help from the Lizard in this story.

Then we see Spidey using his tech, giant mecha and foot soldiers in a successful effort at destroying the Kingpin’s stronghold. This brings the new Hobgoblin back into the story, as well as the Green Goblin/Goblin King. Spidey’s weird behavior and blatant fascism brings the modern version of the Wraith into the picture as well. There is even an appearance by Menace, who was a Goblin character that Dan Slott created early in his Spider-Man run.

I’m digging this series a lot more than I thought I would. After finishing this, the last free volume on Comixology, I had to buy the remaining three collections in order to finish this series.

Rating: 8/10
Pairs well with: Other Superior Spider-Man collections and any of Dan Slott’s other Spider-Man titles. 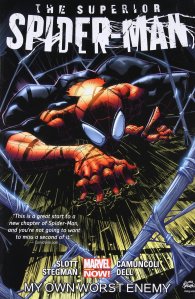 When I heard about this series before it came out, it sounded like a terrible idea and it seemed that my sentiment was also the majority’s. However, as the series rolled on, people really started talking it up and now it is considered by many to be a high point in the decade long run of Dan Slott on Spider-Man titles. So I figured that I’d give it a shot.

The reason why this was so controversial was because Otto Octavius a.k.a. Doctor Octopus put his mind into Peter Parker’s body and hijacked his life becoming Spider-Man and Peter Parker. Yeah, it sounds terrible on the surface and comes off as a cheap trick to try and deliberately stir up controversy for publicity’s sake. And really, that’s probably exactly what it was.

Controversial moments in comics usually turn out poor results in the long run or at least on the creative side. This is a rare example of it actually working and leading into a narrative and creative direction that fans liked. In fact, this series has since ended but fans are clamoring to see the Superior Spider-Man return in some form, especially after his involvement in the recent milestone issue The Amazing Spider-Man number 800.

I don’t know why this works, as it just seems weird and unbelievable even for comic books. But somehow, you know that this is a redemption story for Otto Octavius, even if his actions to put this in motion were rather heinous. His goal is to be the “superior” Spider-Man and also the superior Peter Parker. He wants to be the best version of both personas that he can possibly be.

Otto alters how Spider-Man operates in a way that is more efficient and he also strives to better Parker’s personal life by going back to school to get his PhD.

Another interesting part of the story is that Peter still exists as a ghost that is attached to Otto but Otto is still unaware of Parker’s presence and his constant commentary on how Otto is messing up his life and reputation.

I know that the premise may sound stupid or off-putting for old school Spider-Man fans but man, this really is a good read and I feel as if it is only going to get better as it finds its stride.

Rating: 7.5/10
Pairs well with: Other Superior Spider-Man collections and any of Dan Slott’s other Spider-Man titles. 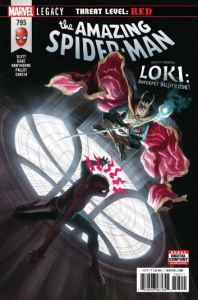 I’m reading a lot of The Amazing Spider-Man stuff leading up to issue 800, which is to be the finale of the Dan Slott era. Having just finished up Venom Inc., I jumped right into the next story arc, Threat Level: Red, which spans issues 794 through 796. It’s not a long story arc but it is Slott’s penultimate story before getting into Go Down Swinging.

This also serves to setup Go Down Swinging by dropping little hints about something bigger being in the works, as you see the original Green Goblin, Norman Osborn, acquire the Carnage symbiote.

The first deals with Spidey and his girlfriend Mockingbird going to London to stop Scorpio. The second is an adventure that teams up Spider-Man and Loki, who has replaced Doctor Strange as the Sorcerer Supreme. The third and final tale sees Spidey and Flash Thompson as Anti-Venom defend a facility from the Goblin King and his Goblin minions.

While the three stories were fun, it was all mostly filler and the important bits of the story were the evolution of Norman Osborn into the Red Goblin a.k.a. the Green Goblin with the Carnage symbiote under his control.

This was enjoyable and it set the tone for Dan Slott’s final story.

Rating: 7/10
Pairs well with: The story before it, Venom Inc. and the one following it, Go Down Swinging.