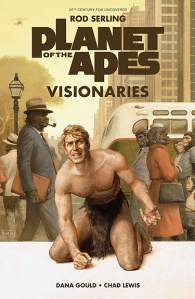 Man, I dug this a lot more than I thought I would, as a lot of similar comics that are based on different takes of famous stories or adapted from first draft scripts have fared fairly poorly.

Comedian, Dana Gould, took the first draft Rod Sterling script for the 1968 Planet of the Apes movie and crafted something really cool. And if I may be so bold, I kind of like this story better than the one that became the Charlton Heston-led picture.

It’s easy to see why this script was greatly modified, though, as a film made from this script would’ve cost a lot more to make and would’ve required more effects work. Reason being, they would’ve had to make costumes and prosthetics for more ape characters just to populate the background, as this mostly takes place in an urban metropolis.

What’s cool about this is that you can see the things they took from this draft of the script and eventually used for the third Apes film, which saw a few apes arrive on our Earth. So some of the cooler elements of this script were eventually filmed, the only real difference was that roles between the human and ape characters were reversed, which still saved the studio from spending more money on effects, as they only needed two ape characters for those scenes.

Apart from the setting and the apes living in a modern Earth type world, the only other major change is that the protagonist dies at the end. The ending, apart from the death, is essentially the same with the reveal of the destroyed Statue of Liberty.

I should also point out that the art in this was really good and it captured the tone well. The book looked better than most of the comics put out by the big two over the last few years.

Rating: 8.5/10
Pairs well with: other Planet of the Apes comics, as well as other comics based off of first draft scripts or novels that differ from their movies. 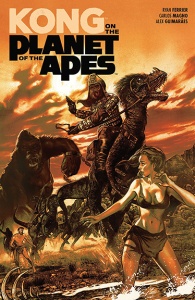 This seems like such a natural idea for a crossover that I’m surprised that it wasn’t done earlier than 2018. And while I’ve kind of grown tired of franchises crossing over just for the hell of it, at least this one found a way to come together without having to use magic, portals or wishy washy dimensional travel bullshit.

King Kong just happens to exist on the same Earth as the apes of the future and he’s just remained on his secluded island with tribal humans, undiscovered by the apes that rule the planet.

In this story, the famous apes from the classic Planet of the Apes film series stumble across Skull Island and discover the giant kaiju beast that is worshiped as a god. Of course, the military apes have to capture the big beast and enslave the tribe, upsetting the more rational scientist apes. This leads to conflict amongst the apes, as well as with the humans and with Kong, who isn’t too keen on these simian invaders.

It’s a very straightforward story and there aren’t any real twists or swerves. It’s just a good, interesting setup and then the plot does its job, giving us a pretty satisfying conclusion.

This is a good example of a franchise crossover in the comic book medium. Everything felt natural and wasn’t at all forced.

Overall, this was an enjoyable read and it felt like it fit well with either franchise.

Rating: 7/10
Pairs well with: other Planet of the Apes crossover comics. 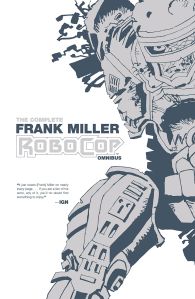 This collection is really just two stories, it is Frank Miller’s versions of RoboCop 2 and RoboCop 3.

The comics here are adaptations of the screenplays that Miller wrote but went unused by the studio. However, there is a ton of stuff in these stories that were actually used in the final films. Also, I believe that these are reworked to a degree, as Ed Brisson cleaned up some of the writing and there are things that feel like homages to the two RoboCop sequels more than they were actually in Miller’s script. For instance, a cameo by the Kane robot from RoboCop 2 but with a different brain.

Overall, this was enjoyable but it was bogged down by mostly crappy art. I understand that this style may appeal to some and I think it was chosen because it had an ’80s outlaw comics feel to it but it wasn’t fluid, was often times hard to look at and understand and it put a halt on the narrative’s momentum quite a bit.

Additionally, this was so over the top and edgy boi cringe that I can see why Miller’s scripts were completely reworked and polished into something more palatable for the mainstream. And sure, RoboCop is an over the top, edgy movie for its time but this pushes the bar way too far. Miller seemed to have no restraint and went for shock value and absolute absurdity over writing anything that seemed to build off of the original film in a meaningful or logical way.

The tone is just wrong. I can see where Miller though it was right but these stories are really devoid of the humanity that made RoboCop a much better movie than it should have been.

I can’t say that this is a waste of time for hardcore RoboCop fans. It is at least interesting because it shows you what the sequel films could have been and both of these stories are better than the final film that was RoboCop 3. However, I’d put the final cinematic version of RoboCop 2 well above either of these strange and baffling tales. 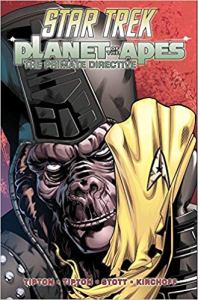 I read this right after coming off of the crossover between Planet of the Apes and Green Lantern. While I did enjoy this, I didn’t have the same level of fun and excitement that I felt while reading the other tale.

Still, this pits two of my favorite franchises against one another and seeing Charlton Heston duke it out on the Enterprise with James T. Kirk is just absolutely f’n badass no matter what their reasoning.

I guess my biggest problem with this was how talkie it was. I get that it is a crossover with Star Trek of the ’60s and it wanted to emulate the spirit of that show but what works for one medium doesn’t always work for another. This should have been more action heavy and when comparing it to the Planet of the Apes and Green Lantern crossover, the action was minimal.

Still, this was a well crafted story, the plot made sense, even if most of these crossovers have the same sort of premise, which involves a portal being open for nefarious means to see two universes collide.

The story also features classic Klingons, which I liked but they didn’t even feel necessary to the story other being used for the setup and to have a reason for a starship battle at the end. I think it would’ve been more interesting to see Kirk and crew marooned on the ape planet, having to fight in a more primitive way like Charlton Heston did in the original film.

If you like both franchises though, this is a decent read. 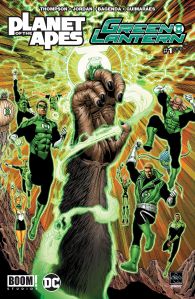 I can’t believe that this came and went and I never saw it. I was at a different comic book shop than my normal one, though, and that’s where I discovered some of the single issues of this series. They didn’t have all of them for me to grab so I got the digital version of the collection because I didn’t want to wait to read it. I’m just a massive fan of both franchises and seeing that they have now crossed over got me really excited, as both universes just fit really well together. More Planet of the Apes crossovers, please!

The way that these universes collide was also really well orchestrated. If you remember the original Planet of the Apes movies, all five of them, once all is said and done, become a time loop. This is due to the ending of part 3 and the events of part 4. Because of this, the Apes version of Earth has been locked away from the rest of time/space. So, at some point, a Universal Ring was created as a sort of master ring over all of the Lantern rings from all of the different color/emotional spectrums. This ring was hidden away on the Apes Earth as it was locked off from the rest of the multiverse.

Anyway, Sinestro wants the ring for obvious reasons. Hal Jordan confronts him but soon finds himself waking up on Apes Earth at the head of the Statue of Liberty, reminiscent of the closing scene of the original movie. A group of other Lanterns tracks him down with help from the Guardians. Guy Gardner brings Grodd with for assistance (not a good plan) and the Red Lanterns follow the Green Lanterns, once they open a gateway to Ape Earth because Atrocitus also wants the Universal Ring.

The premise may sound a bit convoluted but it isn’t hard to follow in the book and I loved it. And hell, maybe it’s created a plot device with the Universal Ring that could pop up again down the road.

I also really liked the art in this book. BOOM! Studios is doing a really good job producing quality indie comics. Hell, this looks better than most modern Marvel series and is on par with the better DC titles.

Additionally, I love that Ethan Van Sciver came back to do a few of the covers for this series.

If you love Green Lantern, especially the Geoff Johns era and everything after, you will probably love this too. If you also love the Planet of the Apes, this will be a fun read for you. If you love both, prepare for a rollercoaster of awesomeness and possibly the need to change your underwear after this book reaches its climax.