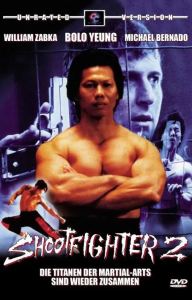 While the first Shootfighter wasn’t a classic by any stretch of the imagination, it still got a sequel. Although, this one is pretty subpar and lacks the charm of its predecessor.

It stars the same protagonist trio of Bolo Yeung, William Zabka and Michael Bernardo. I like these actors and the characters they play but they seemed a lot less into this movie than the first one. Also, it felt like Bolo was barely in it. Although, I did enjoy his final fight at the end, quite a bit. Mostly because I hated this film’s incredibly weak and unintimidating villain.

This took place and was filmed in Miami. I knew a kid that claimed his uncle was an extra in the film but that kid lied all the time and he thought Hypercolor shirts were still cool in 1996.

There’s honestly not much to say about this film other than it’s damn pedestrian, a pointless sequel and it looked like everyone making the film was just as bored as the audience that would eventually watch it.

Although, it did feature professional wrestler Madusa a.k.a. Alundra Blayze, who fought some other chick in a random bout.

I did mostly like the action and I thought that the fighting arena was kind of cool but neither of these things really elevate the picture into anything worthwhile. 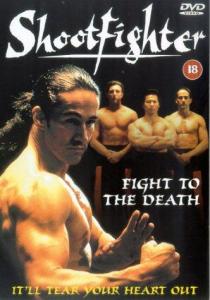 As a pretty hardcore Karate Kid fan, it’s probably kind of nuts that I hadn’t seen this film until now. Reason being, for those unaware, is that it reunites the two antagonists from that film (and the Cobra Kai television series) by featuring both William Zabka and Martin Kove.

This also stars martial arts legend and intimidating badass, Bolo Yeung. And what’s really interesting about Bolo’s role in this, is that he is a good guy! He’s actually the sensei of the two young guys that enter a martial arts tournament put on by a madman criminal.

This movie came out during the height of fighting games in video arcades across the world. It was also the height of low budget, usually straight-to-VHS martial arts flicks. So the story isn’t too dissimilar from that of a classic fighting game. In fact, the two heroes feel like they’re loosely based on and inspired by Ryu and Ken from the Street Fighter video game series.

I like the heroes here, though. They have a good chemistry and camaraderie and I actually like cheering for Zabka, even though I was always pro-Cobra Kai anyway… sorry, LaRusso.

I don’t usually watch these type of movies and expect to be impressed by them. I tend to like them quite a bit, regardless. However, I was impressed by the action and fight choreography in this. While it’s not the most exceptional martial arts action you’ll ever see, it was on par with the best action coming out of low budget US martial arts flicks from this era.

Also, the tone and style of the film is really good and it feels like a fighting game come to life. I wish my fourteen year-old self would’ve rented this back in 1993 because he would’ve probably loved it and watched it as often as he watched early Van Damme movies, as well as the American Ninja series.

I dug this, a lot. I’m also glad that there’s a sequel because I plan on checking it out in about a week, as I work through my queue. 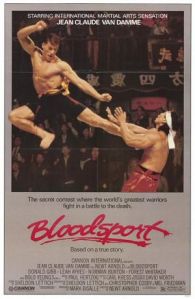 “You break my record, now I break you, like I break your friend.” – Chong Li

After making notable and entertaining appearances in No Retreat, No Surrender and Black Eagle, it was a no brainer to give Jean-Claude Van Damme his own starring vehicle. It was also a good fit, putting him into a loose biopic about the life of martial artist Frank Dux. Granted, this just covers the first Kumite tournament that Dux fought in. However, it’s a more compelling story than what was typical of the late 80s martial arts genre.

In reality, Dux’s claims about his fighting history have been disputed and proven to be false. Regardless, the tale evolved into this movie.

This film was also the first time that Van Damme and Bolo Yeung appeared together. They would also duke it out in Double Impact and have talked about making a sequel to that film.

Alongside Van Damme and Yeung is Donald Gibb, who is probably most known for playing Ogre in three of the four Revenge of the Nerds movies. Norman Burton and a young Forest Whitaker play the men sent to Hong Kong to bring in the AWOL Frank Dux.

In Bloodsport, we follow Dux as he leaves the Army and heads to Hong Kong to fight in the secret underground fighting tournament Kumite. He breaks fighting legend Chong Li’s (Yeung) “world record” and thus, paints a target on his back. Li, who is infamous for murdering his opponents, sends a message to Dux when he severely injures his friend Jackson (Gibb). Dux, while evading the military men sent to retrieve him, must step back into the Kumite ring and avenge his friend against the psychotic Chong Li.

Bloodsport is interesting in that it puts a lot of focus on the tournament itself and the fighters in it. It showcases the varying martial arts styles from different regions of the world and when I saw this as a kid, it was the closest thing we had to a live action version of a tournament fighting game. It was like Street Fighter II coming alive on the screen. Well, until Jean-Claude Van Damme made that Street Fighter movie that is nowhere near as awesome as Bloodsport.

The film has solid action but unfortunately, it takes a half hour or so to get to it. Cannon Films usually kicked off their movies with a big early action sequence. Bloodsport differs from that formula but the action it contains makes up for that lack of instant gratification.

Bloodsport is also one of the best films Cannon ever produced. It is also, still to this day, one of Van Damme’s best pictures. This, alongside Kickboxer, are the two movies I use as the measuring stick for Van Damme’s filmography.

Five Fingers of Death (or King Boxer, as it’s also known) is a stupendous martial arts film from Hong Kong. It came out just before Bruce Lee helped the genre explode internationally. It may be less popular than the pictures of Lee or Jackie Chan but it is absolutely amazing and I rank it above the majority of Lee and Chan’s work.

The film stars Lo Lieh. While he never became an international superstar like Lee or Chan, he was in a ton of films and worked hard to give great performances on screen. He may not have been as accomplished as those two bigger stars, as far as his fighting abilities, showmanship and charisma but he could still hold his own and was better than most.

The film follows Lieh’s Chao Chih-Hao. He leaves his first teacher to train under a more advanced instructor. While at the new school, he becomes caught up in its rivalry with a local tyrant and his lethal henchmen. Over the course of the film, Chih-Hao impresses his new teacher enough to be given the secret of the Iron Fist technique. Everything comes to a head in a tournament but the film goes beyond the traditional climax, as things continue beyond that.

The film has a lot of intertwined characters and stories but it does a good job of managing it all and giving us a non-traditional plot structure. Just now revisiting it for the first time in years, I’m pretty sure that The Karate Kid, the original one, took the bulk of its story from Five Fingers of Death. Seriously, the more I think about it, the more connections I make between the two films. Except people didn’t get murdered or have their eyeballs ripped out in The Karate Kid.

The fight choreography is really good. The cinematography is also really solid. I have always enjoyed the scenes where Chih-Hao channels the Iron Fist power and the filmmakers use hot red lights to highlight his hands.

Five Fingers of Death has also held up really well, especially in comparison to other Hong Kong kung fu movies. It feels like a top notch production with superior camera work, lighting and a very pristine look.