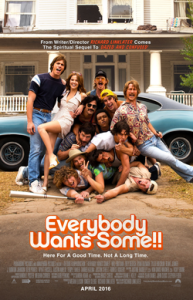 “Have you noticed whenever we’re around baseball all we talk about is pussy. Now, we’re actually around a few potentially interesting young women, all you talk about is baseball. It’s a little fucked up!” – Finnegan

I really anticipated Everybody Wants Some!! when it was coming out. It was Richard Linklater’s spiritual successor to his coming of age classic Dazed and Confused. Also, Linklater seems to really nail it on the head when it comes to coming of age films.

While I enjoyed the experience of Everybody Wants Some!!, it wasn’t on the level of Dazed and Confused. That’s okay though because even if they share narrative and style similarities, they are very different movies.

This film picks up in the summer of 1980 as it follows a college freshman as he moves in with the baseball team to prepare for the upcoming year. The story then captures their lives and their camaraderie while becoming a team and chasing girls. The film ends the moment the first class starts, so it really just focuses on the main character’s introduction to his four year college journey.

The cast is pretty fantastic and Linklater has a way of steering ensembles into great territory. This film is no different in that regard. All the main actors hold their own and feel like authentic teens and twenty-somethings.

I do have to say that Austin Amelio really steals the scenes he’s in but maybe that is because it is hard to envision Dwight from The Walking Dead as some collegiate baseball star. But his comedic timing and presence are great and it was really cool seeing him do something that is such a departure from his more famous character.

I really liked Zoey Deutch in this but she didn’t have a lot of screen time compared to the guys. Speaking of which, Jenner, Powell and Hoechlin had a great chemistry. The other scene stealer though was Wyatt Russell, who just commands attention without really trying but when you are the son of the legendary Kurt Russell and Goldie Hawn, that shit’s in your blood.

Everybody Wants Some!! is pretty enjoyable but it doesn’t have the lasting impact of Linklater’s Dazed and Confused, SubUrbia or Slacker. It is a nice companion piece to those films however and sort of adds a fourth chapter to those pictures that I always thought of as a loose trilogy.