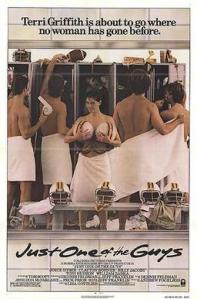 “Budmeister, are you okay?” – Terry, “No, Terry, I’m not. Mom and Dad come home Monday. I’ve had two weeks of total freedom. The closest that I’ve come to sex was a girl who took her top off to seduce my sister. What’s wrong with me?” – Buddy

This used to be one of those movies that was good to watch on a rainy weekend. Plus, it was on cable TV all the time in the late ’80s and early ’90s. It’s goofy but charming and it’s also kind of endearing because of how ridiculous the premise and the execution is while having actors fully committed to the bit.

I really liked Joyce Hyser in this and it’s actually strange to me that this didn’t lead to a lot more work, as she’s pretty good dramatically, as well as comedically. She was also believable and you just liked her and rooted for her, even if it wasn’t entirely clear what the hell was going on from scene-to-scene. You just had her trying to play a teenage boy to prove a point to the teacher that didn’t take her journalistic prowess seriously because she’s a girl. It’s really awkward and quirky but it’s supposed to be.

William Zabka is also in this, showing that he was pretty much Hollywood’s go-to guy for high school/college bullies. In fact, I consider this to be the second part of an unofficial trilogy of films I call the Zabka Trilogy. The other two films being 1984’s The Karate Kid and 1986’s Back to School. Needless to say, he was just good playing a jerk and he’s definitely on his A-game here, as Greg, the popular douche that wears weightlifting gloves and jacks up lunch tables causing nerds to lose their lunches to the cafeteria floor.

The film also features a young Sherilyn Fenn before she’d go on to enchant males of all ages in Twin Peaks.

Another interesting tidbit is that one of the writers on this was Jeff Franklin. For those who don’t recognize his name, he was the creative mind behind Full House and was also a writer on 1987’s Summer School. He also wrote scripts early in his career for The Bad News Bears TV show, as well as Laverne & Shirley and the Tom Hanks starring Bosom Buddies, which may have inspired the story for this film to some degree, due to similarities.

Ultimately, this isn’t a must-see film but it’s still funny, amusing and lighthearted. You can just sit back, kick up your feet and enjoy the ’80s nostalgia and well-aged cheese. 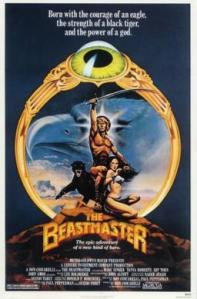 “Don’t move. The beast is fierce. But if we show no fear, we might escape.” – Dar

I used to love the hell out of this film when I was a little kid. It could because it was the first time I remember seeing boobies in a movie and that my parents seemed oblivious to this having boobies and lots of violence and therefore, never making me turn it off when I put it on. But then again, they were usually walking around the house doing adult things.

Anyway, I still like to revisit this movie every few years. It had been awhile seen I’d seen it this time though, maybe five years or more. But I wanted to work my way through all of The Beastmaster films since I haven’t reviewed them yet.

This is absolutely the best film in the series and I’d say that it’s the second best sword and sorcery film after the original Conan the Barbarian, which also came out in 1982.

I think that a lot of this film’s awesomeness can be attributed to it being written and directed by Don Coscarelli, the man behind the Phantasm film series, Bubba Ho-Tep and John Dies at the End. It has a very dark fantasy vibe that isn’t too dissimilar from his Phantasm series. And there are parts of this film that feel like actual horror, like the scenes with the winged demon vampire creatures that captured people within their wings and devoured them, turning them into a dripping acidic goo. Also, there is children sacrifice and all types of other hardcore shit thrown in.

The film also has a pretty layered narrative. It’s a straightforward movie where the hero is born, the hero loses the life he knows due to a tyrant, the hero grows up and then takes the tyrant down. But there are multiple villains in the movie: Rip Torn as an evil religious cult leader and a big brutish warrior with one of the coolest helmets in movie history. Plus, there are other evil abominations thrown in at certain points.

For those that might not know, Dar, the Beastmaster, has the power of befriending animals and using them as allies in his war against evil. It’s a cool concept and even though the idea comes from the book this is based on, which is really all they took from the book, it gives this story an edge over other sword and sorcery movies. Now it isn’t better than the first Conan but it is, at times, more entertaining.

I really enjoy Marc Singer in this. I also liked Tanya Roberts, here, but she was always a favorite of mine when I was a kid, between this film and A View to a Kill. Also, she’s the best thing about Tourist Trap. I think the real highlights for me though, are seeing John Amos being a total buff badass in this, as well as Rip Torn embracing his character’s evil insanity. All of the performances are better than what’s typical within this genre.

The movie has good cinematography and the shots are framed quite well. I especially like the scene where Dar faces off with the evil helmeted dark knight amongst the flames. It was well lit, well captured and the use of contrast in this sequence was well done.

Decades have come and gone since this film came out but like Coscarelli’s other motion pictures, it has survived the test of time and it is still a lot of fun to watch.

Rating: 7.5/10
Pairs well with: other sword and sorcery movies of the time, most notably the Conan films. It’s also fun to watch with its sequels but this is much better than them.

“[finds a femur] Ray, there’s no doubt anymore. This is real. Your neighbors are murdering people. They’re chopping them up. They’re burying them in their backyard. Ray… this is Walter.” – Art Wiengartner

The ‘Burbs is a rare dark comedy that hits all the right notes. Joe Dante was the perfect person to direct the script and the film was also perfectly cast.

While Tom Hanks was already building a name for himself and was a really good comedic performer that could handle more serious or dramatic material, it was this picture that really cemented his status, at least for me.

Hanks wowed people with a dramatic turn in Nothing In Common and even though The ‘Burbs doesn’t get as serious as that film, Hanks could flip the switch from comedy to serious on a dime, which he did here flawlessly. This and Big, which came out just a year prior, are the two films that made me a Tom Hanks fan. Following this up with the underappreciated Joe Versus the Volcano was also a great move by Hanks.

The cast is rounded out by Bruce Dern, Carrie Fisher, Corey Feldman and Canadian comedian Rick Ducommun – a guy that probably should have had more prominent roles like this. The Klopek family, who were the focal point of suburban curiosity, were played by Henry Gibson – who is always fun, Brother Theodore – who was tailor made for this film, as well as Courtney Gains, who creeped out audiences a few years prior in Children of the Corn. You also get to see a young Nicky Katt, before he would become more recognized in his work with director Richard Linklater. Joe Dante also dips into the well of his regulars and gives us cameos by the great Dick Miller and the awesome Robert Picardo.

Mundane suburban life is at the center of the movie, as it follows three very bored suburban men and their wariness over the strange new neighbors who moved onto their street: the Klopeks. As the story progresses, they suspect the Klopeks are murderers. The plot escalates to the point that they can’t resist the temptation of digging up the Klopek’s yard and breaking into their house when they leave one day.

The film is highly comedic but is also a mystery and a thriller with a touch of horror added in. It is a pretty awesome mix and Dante worked his magic to great results.

It is also a highly stylized picture but in a subtle way. It was filmed on the Universal backlot and utilized some of the houses seen in famous sitcoms and other films. In fact, the house that Hanks lives in was used a few years earlier in another Hanks film, Dragnet. The generic suburban look makes it so that this neighborhood could be any neighborhood but it also has a sort of fantasy feel to it. It’s grounded in reality but it skews reality.

The ‘Burbs is solid, through and through. While it has gotten more popular over time, it wasn’t a critical success in 1989. When I first saw it, most of the kids I talked to hadn’t seen it. As I got older and time rolled on, I found more and more people that loved the film after discovering it on video or cable. Still, it surprisingly only has a 49 percent rating on Rotten Tomatoes.

While not explicitly horror, this is a film I have to pop on almost annually around Halloween. 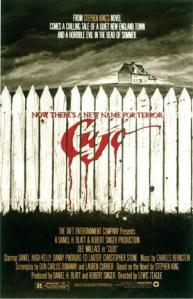 Let me start by saying that I am not a big Stephen King fan. There are some things he’s done that I’ve liked but in all honesty, I’ve usually liked the film versions of his work better. Yes, even the shitty films. In the case of Cujo however, I think I dislike both equally.

This film sucks, plain and simple. But it isn’t like a normal vacuum suck, it is more like the pierced edge of a space station suck where everyone on board is going to get sucked through the dime-sized hole and shit out into space like human spaghetti.

Basically, there’s this unfaithful wife with her son and her piece of shit car. After spending too much time character-building bad characters no one will ever care about, the piece of shit car breaks down in front of a rabies-afflicted St. Bernard. The last half of the film is mom and kid crying in their vehicle as Cujo the rabid St. Bernard barks incessantly and slobbers all over the windows.

The kid (played by Jonathan from Who’s the Boss) is a giant bitch for such a little guy. He’s also so damn annoying with his crying and whining. I cheered for the dog when it gave him rabies, because at least it shut the kid up. In fact, I started cheering for the dog the whole rest of the movie because the mom was so stupid, she deserved to be eaten.

And yes, I know she is played by Dee Wallace and that Dee Wallace is a horror icon but I don’t care. Everything about Cujo sucks. She should’ve known better than to have signed on to this mess.

This film couldn’t have stunk worse, even if the victims were trapped in an outhouse instead of a car.

I don’t really have much else to say because I want to move on with my life now and pretend that this film doesn’t exist even though, for some reason, some idiots like to bring it up as some sort of classic. It’s not a classic. It’s a pile of crap, plain and simple.