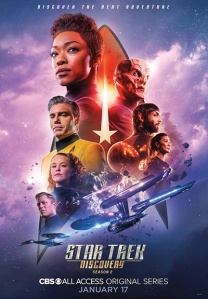 I didn’t want to subscribe to CBS All Access just to have access to this show. There wasn’t much else on the service that I wanted to watch. So I figured that I’d wait till this was out and then I’d binge watch the first season.

However, based off of what I heard about the first season (and later, the second season) I refrained from subscribing, even for a month.

Well, I finally got to check it out on a Delta flight. I figured I’d watch the first two episodes and figure out if I wanted to continue on. I didn’t.

This show is a fucking abomination. My worst fears were true and this was just a shittier version of J. J. Abrams’ mostly shitty modern Star Trek stuff. Throw in a bunch of identity politics nonsense to boot and I’d rather wipe my ass with a sharp spoon than watch another episode.

A guy at work kept telling me, “Don’t believe all the negative hype, it’s not that bad. Give it a shot. I think you’ll like it.” I put in a formal request to have this guy fired. I don’t think that my employer will approve it just based off of my comments, so I also included a thumb drive with clips from the show.

On a side note, I really like Anson Mount. Dude is a stellar fucking actor but I couldn’t get through two episodes of this Dumbo-sized shite to even make it to his episodes. Between this fucktard show and Inhumans, dude might need to fire his agent.

The special effects aren’t as good as people have said yet this show is insanely expensive to produce.

Also, what the fuck is up with the Klingons? No, seriously? They don’t look like Klingons, they look stupid. I think that somewhere down the line, these Klingons reproduced with that tar monster that killed Tasha Yar on Star Trek: The Next Generation.

This is NOT Star Trek. It’s some fan fiction by a fan that isn’t even a fan, who got all their Star Trek lore from some drunk old hippie at the corner bar.

This is to Star Trek what Applebee’s Riblets are to A5 Wagyu.

It’s unwatchable, unexciting and will turn most people into somnambulists.

It’s fitting that this show is abbreviated as STD. I should have bought two condoms and just put them over my eyes because this is certainly the genital warts of the franchise.

All that being said, I hated this show like a vegan bitch hates Longhorn Steakhouse. 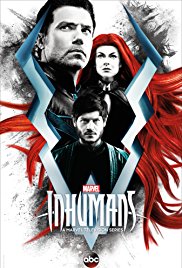 Well, this show has been trashed by just about anyone and everyone who actually took the time to give it a watch. Being that I have seen everything within the larger Marvel Cinematic Universe, I couldn’t just ignore this and knew that I’d have to give it an honest shot.

It’s pretty damn bad but it isn’t as horrendous as many have claimed. I saw that it was expiring soon on Hulu, so I figured I had better binge through this quickly before losing the opportunity.

To start, this should have really excited me. It stars Mr. Bohannon from Hell On Wheels a.k.a. Anson Mount. He also plays Black Bolt, a character I have loved in the comics for years. Sadly, Mount can’t speak in this part because his voice is like getting bitchslapped by God. He spends most of his time talking in sign language as Medusa translates for him. When Medusa isn’t around, he just gives very intense stares that make me think he is going to crack my television screen.

Medusa is pretty terrible and unlikable but then so are all the heroes. Crystal is damn cute but she always has this look on her face like she just sipped on a cup of tea and noticed a cat turd floating in it.

Speaking of Crystal, her story is the worst thing about the show. It is a little teenage love story that comes off like one of those Miley Cyrus Disney movies before she cut all her hair off and got her boobs out a lot. Crystal’s boyfriend is some Hawaiian surfer brah that tells her to “hang ten” all the time. In fact, Crystal is lost and trying to locate her family and surfer brah says, “Hang ten! Jump in the water with me! We’ll look for your family later!” Dude’s a total Disney Channel douche nugget and he probably calls his mom “brah”.

Iwan Rheon who was a big deal on Game of Thrones, a show I don’t like or care about, plays the bad guy but he’s just a human being. Actually, he’s a sour, jealous bitch that didn’t get magic powers like the other Inhumans and he somehow kicks them out of the kingdom and takes over the Moon. I loved Rheon on Misfits though and that was, by far, an infinitely better show than this or Game of Thrones.

I don’t know, the more I think about this show, maybe it is as bad as all the detractors are saying.

On a positive note, it was filmed in beautiful Hawaii. So all the scenery was breathtaking and amazing but I’d rather just watch Lost, Hawaii Five-O, Magnum P.I. or Saved by the Bell: Hawaiian Style.

Rating: 4.5/10
Pairs well with: The other MCU TV stuff but this was so bad and short-lived that I’d imagine it will be ignored in the future and that Disney will revisit these characters in a completely different way, years from now. 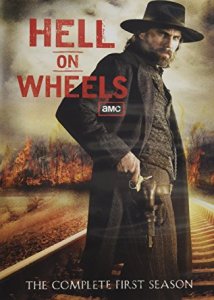 I didn’t start watching Hell On Wheels until recently. I watched the pilot when it originally aired but it didn’t immediately capture me and I didn’t have a lot of time, back then, to keep up with the show on a weekly basis. Shows play much better for me when binge watched.

Having a strong desire for a good western television series and after years of friends touting this show, I figured that it was time to give it a real shot.

Well, AMC has kept their track record of stellar television alive with Hell On Wheels. It is the best western TV series since HBO’s Deadwood and it has actually surpassed it a bit, at least for me.

The cast of Hell On Wheels is marvelous. Anson Mount as lead character Cullen Bohannan is the perfect western protagonist. He is ex-military, has a vendetta against some evil men, is good with a gun, is no nonsense and just a good old badass. Colm Meaney, most famous for playing the lovable and nice Chief O’Brien on Star Trek: The Next Generation and Star Trek: Deep Space Nine, is better than fantastic as Thomas Durant – a mean and sometimes sinister railroad baron. Common has his best acting role to date, as Bohannan’s friend and badass partner, Elam Ferguson. The cast is rounded out with other great talents and every regular on this show is perfect. But the absolute cream of the crop has to be Christopher Heyerdahl as Thor Gunderson a.k.a. The Swede, who is quite possibly the best villain in television history. The guy is magnificent, his execution is absolute perfection and he seriously gives you the chills.

This show is a work of art. It feels meticulously crafted and the writing is superb. I have read where some people don’t like the direction of the show after the second season but I am fine with it. The show evolves, it changes from year-to-year after the first two seasons were very similar. There just isn’t a low point for me. Granted, there is still a half of a season left where it could go off the rails but I’m pretty confident that when the show returns in a few months, we won’t get an ending on par with the crappy final episodes of Sons of Anarchy or Dexter. And we hopefully won’t get a big unanswered cliffhanger like the similar Deadwood.

I love Hell On Wheels. I would have liked to see it go on for more than five seasons but many great shows don’t make it past a single year. Luckily for us, this solid show got half a decade to shine and develop. One thing is for certain, I will be paying close attention to the careers of Mount and Heyerdahl after this show ends.

Rating: 9.5/10
Pairs well with: Deadwood and Longmire, both shows with a western feel and a modern edge.