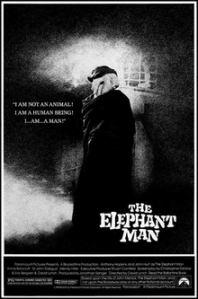 Few motion pictures are truly perfect. This is one of those few.

As far as I’m concerned, this is still the greatest thing that David Lynch has ever done. And while I like his visual style and artistic quirkiness, I’m not a big fan like many other film aficionados are.

That being said, this is his most normal picture. He doesn’t get overly bizarre and lost in trying to put his own dreams to celluloid. Here, he has a real story to tell and given a more defined framework, I think he excelled as a director with this movie above all of his others.

What’s strange about that, is that this is only his second feature film after the absolutely bonkers, shrill and disturbing nightmare known as Eraserhead.

The success of this film led to Lynch getting the offer to direct Return of the Jedi, which he turned down, as well as 1984’s Dune, which I like but ended up being such a bad experience for Lynch that he pretty much quit mainstream movies and went back to making bizarre, personal art films more akin to what he did with Eraserhead and his short films before that.

I love that this was presented in black and white, as it gives it a truly timeless feel and it generates the same sort of aesthetic as many of the great classic horror films of the 1930s and 1940s. It also has the same sort of cinematography, as it employs a chiaroscuro visual style with high contrast between light and shadow.

Given the film’s setting and the makeup of the title character, this visual style gives it a real majestic, classic cinematic feel that probably wouldn’t have been possible if this was released in color. It helps set the mood with the more horrific elements, while also giving the film a quality of old world naivete, which is important in allowing the audience to connect to the pure innocence of Merrick, the Elephant Man.

The picture is stupendously acted. Anthony Hopkins and John Hurt are absolute perfection in this and you really fall in love with both men through this incredibly emotional and very painful journey. But you also feel their emotion to the bone when the best parts of humanity find a way to outlast the worst parts. This is a film that is just as much about the darkness of humanity as it is about humanity’s light. That’s probably another reason why presenting this in black and white is so effective.

There are terrible human beings in this movie and frankly, it’s impossible to watch this and not be emotionally effected by that darkness. This is a really hard film to experience because of that but ultimately, a positive light does push the darkness back and while the ending is tragically sad, it’s also strangely satisfying knowing that the film’s subject left on his own terms in the only place he truly felt at home.

That being said, for me at least, this is one of the most emotional experiences I’ve ever had with a movie. It’s not something I can go back and watch often because it really does drain on your soul, even with the mostly positive outcome.

I have no idea what it is about this film that makes it a legitimate masterpiece. I think it’s simply a perfect storm of everything just working together, wonderfully.

The Elephant Man is truly cinematic magic in how it can give you both the worst of human nature and the best. It is an astounding, exhilarating and terrifying experience.

Rating: 10/10
Pairs well with: David Lynch’s earlier work, as well as other top notch period dramas of its era.

This is a really interesting film about mental illness. It came out in the 1950s when there wasn’t as much knowledge about the subject but compared to other films from the time, this one is actually really respectful towards mental health. Honestly, Don’t Bother to Knock is probably one of the best movies of its era to actually try and tackle the issue, as it doesn’t make the character struggling with it into a psychotic nutjob.

The film gives top billing to Richard Widmark but the real star of the picture is Marilyn Monroe, who plays a babysitter that mentally breaks down as the story rolls on. I’ve absolutely got to give Monroe props in this role, as she truly comes across as believable and makes you feel for her on a pretty deep level.

In fact, this is one movie that you can point to when people claim that Monroe was just a pretty face. She handled the material with a sort of grace and respect that transcends the picture. And if I’m being straight here, I’ve never been a massive Monroe fan. But her ability to act in this picture was stupendous and it kind of makes me want to reexamine her other roles.

Additionally, Widmark is superb in his role, as are Anne Bancroft, who I wish had more screen time, and the always entertaining character actor Elisha Cook Jr.

This is a sympathetic and intelligently handled picture where the cast figures out something is off with this girl but they ultimately rally around her to give her the help she desperately needs. It’s hard to say what happens to her after the film but you do leave with the feeling that the core characters in this story will be there to help her heal, as opposed to just sending her to an asylum and being done with her uncontrollable antics.

Directed by Roy Ward Baker, who would go on to do a lot of horror and sci-fi pictures, the film is well shot and it shows that the guy had a real skill that his later work might not have showcased nearly as well. While I enjoy the work he did for Hammer and Amicus, the two horror giants of the UK, this may be the best film of his that I’ve seen from an artistic and technical standpoint.

Don’t Bother to Knock has been a film that has been in my Prime Video queue for a long time. I’m glad that I finally got around to giving it a shot, as I was pleasantly surprised by it on just about every level.

Rating: 7.75/10
Pairs well with: other early ’50s film-noir, as well as other early Marilyn Monroe movies.

“Anyway, I’m scared. You don’t know what it is to live with your back against the wall, Marie. Inside you change. You really change.” – James Vanning

Jacques Tourneur was always a solid director, so I definitely wanted to check out this film-noir picture of his, as I hadn’t yet seen it. Plus, it was part of the Criterion Channel’s Columbia Noir featured category and I’m trying to work through all of the films on that list that I haven’t yet seen.

I jumped on this one because I like Tourneur and I also wanted to see something with Anne Bancroft that came out much earlier than her most famous role as Mrs. Robinson in 1967’s The Graduate.

Tourneur had a great eye and a real understanding of cinematography, lighting and shot framing. He was a maestro of mise en scène, which is very apparent in his earlier horror films: Cat People, I Walk With a Zombie, The Leopard Man and his most famous noir: the Robert Mitchum starring Out of the Past.

Nightfall is no different and frankly, it’s a fabulous looking picture with a meticulous attention to detail in a visual sense. It looks crisp, pristine and the silvery hues are greatly accented by a mostly subdued but pretty apparent chiaroscuro presentation. The film uses contrast greatly, which is mostly done fairly subtly except for the wilderness scenes where the snowy landscape sort of works as a blank backdrop and pushes the characters to the forefront. The big fight at the end is the greatest example of this, as the two men fight in the snow, ending with the villain getting eaten alive by a snowplow truck. I kind of expected some black blood splatter but that was too graphic for 1956. Tourneur probably would’ve given it to us if this was one of his horror pictures though.

The film also benefits from the good chemistry between its leads: Aldo Ray and Anne Bancroft. Their relationship seemed natural and organic and in the early moment in the film where you feel that she set him up, your heart sinks a little bit.

Aldo Ray, who I haven’t seen in much, made me a fan with his performance here. He is a rugged man but he is able to convey a sort of gentle softness without sacrificing his masculinity. You feel for the guy and want to see him come away from this story unscathed but this is a noir picture and that’s something that rarely happens.

While you may feel a bit of frustration with Bancroft after her first encounter with Ray, she wins you back over rather quickly and even if you are waiting for that standard femme fatale double cross later in the film, she’s very easy to like. But does she turn against our hero? And does he have a happy ending? I’d rather not spoil it.

Nightfall is a much better film than I anticipated it being, even as a Tourneur fan. It’s a solid film-noir even if it doesn’t go as dark as the genre typically does. I’m kind of baffled that it isn’t more widely known and held up as one of the top noir pictures alongside Tourneur’s Out of the Past.

Rating: 8.75/10
Pairs well with: other Columbia Pictures noir films: Pushover, My Name Is Julia Ross and Drive a Crooked Road.