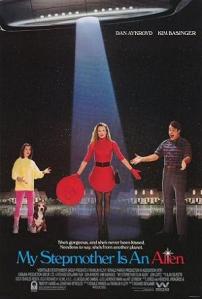 “I saw her drink the battery juice from your Honda!” – Jessie Mills

My Stepmother Is An Alien is not one of those beloved classic comedy films of the 1980s, even though it stars Dan Aykroyd. It also has Jon Lovitz but this was before he really found his comedic stride.

For some reason, I always liked it though. Maybe it is because I had the hots for Kim Basinger when I was a kid and was mesmerized by her in 1989’s Batman. Or maybe because I thought Alyson Hannigan was kinda cute. Hey, we were both kids then. In any event, I liked the movie. Although, I hadn’t seen it in a really long time.

Revisiting it now, I see a film with a plethora of flaws and major issues. However, I still kind of liked it. It had charm and it was lighthearted, fun and a safe mindless movie. It’s pretty much lowest common denominator 80s comedy schlock but sometimes that sort of schlock works for me.

No, I don’t want to watch this all the time or even revisit it in the near future but it has the right sort of vibe when you just want something cute and fun to lighten the mood and kill a few hours of your time.

The film is bizarre and hokey but everyone in this thing looks like they had a blast making it. Sure, the chemistry between Aykroyd and Basinger is weird but it’s supposed to be and ultimately, despite that weirdness, they seem genuine.

Alyson Hannigan, as a child actress playing in her first movie, does a dynamite job and is incredibly believable as a young kid in distress over her discovery that her stepmother is an alien. Unfortunately, she is quick to switch gears which sort of thwarts her performance from that point on but that’s the writing and not her fault.

If you don’t have high expectations and just want to lay back and chill with something goofy and fun, then give the film a shot.