Well, I don’t know how the volume after this one is but thus far, this is the peak of James Tynion’s Detective Comics run. This built off of all his stories before this one, tied them all together in a great way and delivered on a few major narrative promises established in earlier volumes.

In fact, this volume made the volumes before this one better. That’s a hard thing to do but Tynion proved to me, here, that he is a pretty worthy Batman writer.

As I’ve stated in just about every review of every volume in Tynion’s run, I don’t like large Bat-Family groups. But Tynion makes the most out of it here and this may be one of the best Bat-Family stories I’ve read in recent memory.

If you are a Clayface fan, which I am, this story is pretty heartbreaking. I don’t want to spoil anything but if you’ve read some of the stuff before this, things come to a head and it’s pretty emotional. And there’s a lot to be said about that, as comics rarely make me emotional these days.

The Victim Syndicate return and we discover that they’ve had a bigger, darker plan all along. While I didn’t like this villain group when they debuted, they really start to gel here.

As should be expected with a comic book title of this caliber, the art is superb and every panel of this book looks great.

In an effort not to spoil more than I may already have, I’ll shut up now. This was a damn solid story with real consequences that the team can’t just walk away from. It’s got me excited to read the followup, which is Tynion’s final volume. 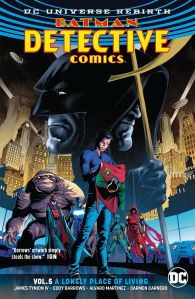 The few volumes before this story weren’t all that great. However, they existed in order to lead up to the return of Tim Drake a.k.a. Red Robin. And now that Drake has figuratively risen from the dead, most of those other stories paid off in providing us with this solid tale.

As I’ve stated before, I’m not a fan of Batman working with big teams. But this team worked well in this volume and it kind of made Drake’s return much more impactful.

This also deals with a future version of Tim Drake that has become his timeline’s Batman. He has come back in time to kill Batwoman, as it is said that she is on the verge of doing something terrible that destroys the timeline that future Batman comes from.

While future Batman is subdued, the story serves as a warning for something involving Batwoman after this volume. And frankly, the way it was presented and laid out here, has me intrigued for what’s next in this series.

Again, James Tynion IV does a good job writing. Plus, the art by Eddy Barrows and Alvaro Martinez is superb. This looks like what a top tier major comic book should look like in 2019 unlike the big slew of Marvel titles that look like amateur Tumblr art.

I mostly enjoy James Tynion’s writing. He does a pretty good job with this series, even if it isn’t wholly my cup of tea because I’m not a fan of large Bat-Family groups. I like Batman working solo or with one or two other close allies.

But I still like Tynion’s run on Detective Comics enough to keep reading it, so there’s that.

I think I am mostly drawn in to the Clayface stuff because I actually like seeing him trying to redeem himself and work on the right side of the law.

While Clayface isn’t the focal point here, though, we do get to dive deeper into Azrael’s world. Now he’s a character I have a love/hate relationship with. But in this series, so far, I mostly like him and this chapter wasn’t any different.

This also puts some focus on Zatanna, who I was happy to see pop up, even for one volume. More importantly, this gives us some good backstory to her and Batman’s relationship, going back to their teen years when Bruce was trying to train under her father.

Overall, this was a quick, energetic read that added some new things to the plot and also served to strengthen the bond between this team of characters.

Most importantly, this brought Stephanie Brown a.k.a. the Spoiler back while also dropping hints that Tim Drake a.k.a. Red Robin was possibly still alive.

In the end, I like where this volume went and it ended in a way that makes me want to see what happens next. 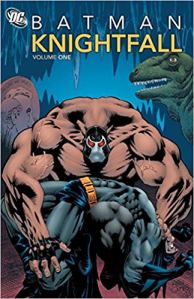 I’ve put off reading the Batman: Knightfall saga for so long because of two reasons. It’s spread out over three massive books and each of those books is pretty pricey. However, Comixology now has the first book available for free to Unlimited subscribers and they just had a big sale on the other two books. So I was able to get this whole thing for about $8.

So now that I have this series in my possession, I can start reading all 2000-plus pages of it. Yes, it’s a real monster – big enough to rival the mass of Bane on the cover.

Over the years, I’ve acquired a few of the issues within this massive saga but it started to come out as I was going into high school and I moved to a much smaller town where I couldn’t buy comics. So I never really got to read it, even though I’ve come to know the story fairly well.

The story, mostly penned by Doug Moench and Chuck Dixon, is quite good. There are a lot of layers to this massive story, as there should be due to how much material it has between its covers. However, some things do feel a bit rushed, as there isn’t much build worked in to the major plot developments.

For instance, Batman is broken pretty quickly in this saga. And then Azrael is given the mantle of Batman and immediately, he acts like a psycho in how he fights crime. He’s a dick to Robin, he almost lets a kid die to pursue the baddie and he retrofits the Bat-suit with claws and spiky, metal shit. I think it would have enriched the story to show Azrael slowly slip into this aggressive new Batman.

Still, that doesn’t hinder the book very much, as there are so many other characters and situations to track through this volume’s 634 pages.

I was surprised to see Azrael actually defeat Bane in this book, as it is only the first third of the saga. So I don’t really know what that means going forward and I was pretty sure that Bane’s fall would be at the end of this huge saga.

This is absolutely quintessential ’90s Batman though. And that’s really what’s so great about it. Bane is the perfect villain for this era and Azrael is a very ’90s twist on heroism. I even enjoy Azrael’s cringeworthy Bat-suit because despite its awfulness and nonsensical design, it fits the era.

Additionally, the art in every issue collected in this giant piece of work is damn good. I’ve always been a big Graham Nolan fan and his work here is some of his most memorable.

I’m glad that I finally read this. It exceeded any expectations I had for it, even if I thought the narrative was choppy in parts. But I also attribute some of that to this story being a big crossover with multiple writers.

If you haven’t read Knightfall, you probably should.

Rating: 9.25/10
Pairs well with: the other books in the Knightfall saga, as well as pretty much any Batman story from the ’90s. 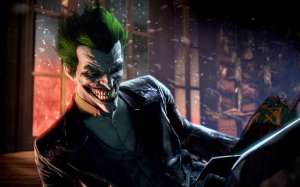 *I played the PlayStation 3 version. The game is also available on Xbox 360, Wii U, Windows and OS X.

Having beaten Batman: Arkham City last week, I immediately wanted to jump into the next game in the series, Arkham Origins. This game is a prequel to the Arkham series of Batman video games and the third title, with the fourth to be released next year.

This game is incredibly consistent with the previous entries in the series and that consistency is why these games are so great. The first game worked so well, that they haven’t deviated from it too much and only tweak a few things here and there. When playing these games one after the other, the transition is seamless and it all meshes perfectly together like they are all just big beefy chapters of one big interlocked tale. In essence, that is what they are.

The thing that sets this game apart is the fact that it puts a lot of emphasis on some of the lesser known villains in the Batman mythos. Black Mask and Anarky are two villains that are a major part of the story. The Riddler is simply known as E. Nygma, which was a nice touch. Deathstroke, Deadshot, Firefly, Shiva and a bunch of other characters show up that aren’t as recognizable as some of the more famous villains. To whet the palate of the less initiated Batman fan, there are appearances by the Penguin, Bane and the Joker. Mr. Freeze also shows up in bonus content and the Mad Hatter takes Batman on a psychedelic Wonderland adventure.

Additionally, half of the massive Gotham City map is the same as the map in Arkham City. In fact, all the landmarks are still there except being that this is a prequel, they are pristine and nice and not completely overrun by henchmen and street trash.

This game gives the player a unique backstory on the Arkham series and establishes how Batman met the Joker and how the Riddler started out. It also gives one a sense of how things were when Batman was still a newbie and the bigger villains hadn’t shown up in Gotham City yet. It is a very mob driven town, a little less crazy than what it becomes but the introduction to the Joker brings a serious tonal shift to the game and pulls the player back into just how insane this ride would become for Batman.

I don’t know which game in this series I like most. They are all like really stellar seasons to a really amazing television show. They are different yet they are the same. Each is almost devoid of weakness and they all have their own unique strong bits that set them apart but make them all equally spectacular.