I don’t know if I’m just burnt out on these type of documentaries but this one didn’t keep my attention.

Reason being, it didn’t tell a story, really. It did go through the history of 2000 A.D. but everything was done in a heavily edited interview format. There was no narration and this felt kind of disorganized.

Being an American and not as familiar with this comic as someone from the UK, I was hoping for a good, comprehensive history on this. It probably works well for UK fans but Stateside I felt like it missed the mark.

Granted, it was cool seeing a bunch of creators, whose work I love, talking about 2000 A.D. with a lot of passion. I liked seeing the bits on Judge Dread and the stufff involving Neil Gaiman and Grant Morrison. Their two cents are always worth the price of admission when it comes to talking about comics of the past.

Still, even though this was full of people I wanted to hear from, it was quite long for what this needed to be and for how it was presented.

Maybe get some narration, organize the sections a bit better and tell a more cohesive story.

Rating: 5.75/10
Pairs well with: other comic book documentaries of the last few years. 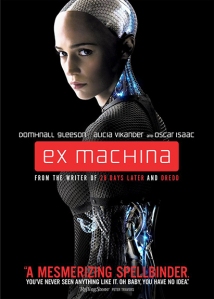 Initially, I had planned on seeing this in the theater when it came out in the States in early 2015. For whatever reason, I never got around to it. Then it was saved on my watch list on Amazon Video for a really long time. Finally, I got around to it and I’m glad I did.

This film is the directorial debut of Alex Garland, who wrote Sunshine, 28 Days Later and Dredd – three movies I really like. I assumed that this would follow suit.

The movie stars Oscar Issac and Domhnall Gleeson, who both worked together after this in Star Wars – Episode VII: The Force Awakens. It also stars Alicia Vikander, who has worked with Gleeson in Anna Karenina.

Issac’s Nathan Bateman invites one of his company’s programmers Caleb Smith to his isolated home. Nathan tells Caleb that he has successfully built a humanoid robot with artificial intelligence. Caleb is told that he is there to test the robot, Ava. It is his job to decipher whether or not Ava is capable of having genuine consciousness. He also wants to see whether or not Caleb can relate to her, even though Caleb knows she is an artificial being. Of course, there are a lot of twists and turns and you are never really sure who has the advantage in this three-way chess game between our characters. Revealing anymore would start to spoil things.

The film really has two locations, the luscious and vast wilderness surrounding Nathan’s extremely secluded home and the home itself. The outdoors is beautiful, majestic and colorful. The indoors is dark, cold and devoid of any color other than a few lights, a few windows and a Jackson Pollock painting.

The two locations really create the idea of two worlds or two types of existences that reflect the emotional struggle of Ava, who is essentially trapped in her apartment within Nathan’s home. Ava desperately wants to see the outside world, as her entire existence has taken place within the dark, cold, colorless interior.

The film is beautiful, visually speaking. It is well shot and I really liked how a lot of the shots during Ava and Caleb’s discussions were framed, adding a lot more depth to the narrative of their relationship.

All the actors did a marvelous job with their roles. Oscar Issac was charismatic yet so unlikable in the best way possible for his character. Gleeson is really the complete antithesis of his character in The Force Awakens where he was a Hitler-esque leader in the First Order. Here, he is a sort of frail and soft character, although very likable and heroic, in a sense. Vikander fantastically plays the role of the android while having the perfect balance between naivety and cunning.

Ex Machina isn’t a great picture but it is a solid one. It doesn’t really tread new territory in regards to artificial intelligence and whether or not artificial life is really life once it is conscious and emotionally aware. However, it brings those questions back up and delivers them in a pretty refreshing way. While A.I. stories aren’t new in fiction, Ex Machina is, at least, not a direct retread of things we’ve seen. It is its own story, with its own twists and it is smartly written. It is a really good first time effort behind the camera for Garland.