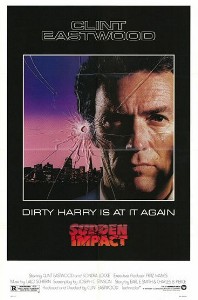 “Listen, punk. To me you’re nothin’ but dogshit, you understand? And a lot of things can happen to dogshit. It can be scraped up with a shovel off the ground. It can dry up and blow away in the wind. Or it can be stepped on and squashed. So take my advice and be careful where the dog shits ya!” – ‘Dirty’ Harry Callahan

So how does Dirty Harry hold up four films deep?

I feel that it’s pretty obvious that the franchise waited too long between the third and fourth films and maybe they should’ve just left the series a trilogy. Coming out in the ’80s, this movie loses its gritty ’70s vibe. Now that didn’t necessarily have to happen, as the Death Wish sequels were pretty solid, especially the second and third films.

This one just took some missteps.

To start, the opening credits have more of an ’80s poppy jazzy tune, which immediately changes the series’ aesthetic.

Additionally, the bulk of the film takes place outside of San Francisco. Seeing Harry fight scumbags in a small California coastal town just isn’t as cool or exciting.

I also didn’t like the story. I mean, it was okay in that it followed a woman trying to get revenge on the pieces of shit that raped her and her sister but the film was really dragged out for too long and the story just couldn’t pick up the momentum it needed.

As far of as the positives, this film does have my favorite scene in the series that doesn’t involve Harry using a gun. It’s the same scene that I quoted to kick off this review.

Also, I really liked Harry’s gun in this film: an AMP Auto Mag Model 180. Ever since seeing this film, as a kid, I wanted to one day own one of these just because of how cool, gigantic and badass it looked. Although, it falls behind the ridiculous Wildey Hunter .475 Magnum that Charles Bronson used in the incredible Death Wish 3.

Apart from those two things, the only other real positive takeaway is the finale. It’s a bit underwhelming, if I’m being honest, but that moment where Harry appears in silhouette on the carnival boardwalk still gives me chills. It’s absolutely one of the best “I just came here to fuck shit up” moments in motion picture history.

Sadly, though, this film doesn’t live up to the Dirty Harry name and feels more like an Eastwood picture that could’ve just existed on its own.

Rating: 6.25/10
Pairs well with: the other Dirty Harry movies, as well as the Death Wish series.

“I’ll tell you what you are to me, little man. You’re just a maggot who sells dirty pictures.” – ‘Dirty’ Harry Callahan

By the time you get to the third film in a movie series, one would usually expect the quality to start waning. However, Death Wish 3 has the greatest action finale of any movie ever made, so maybe Dirty Harry 3 a.k.a. The Enforcer would follow suit.

Well, this is no Death Wish 3 and it’s also not Dirty Harry 1 but I do like it slightly better than Dirty Harry 2 a.k.a. Magnum Force and thought that it was a very worthy sequel that kept the Harry character relevant.

This film gets away from the “system is broken” plot line that was featured so heavily in the first two movies. Sure, we see an idiot mayor and city officials that run the town like morons but this is also San Francisco and we all know how that city turned out in the future: hobo poop and dirty needles everywhere.

Anyway, this film focuses on a different political message in that it forces Harry to have to team up with a new partner: a woman. This woman is played by Tyne Daly of Cagney & Lacey fame and I’ve always kind of liked her, so it was cool seeing her play another female cop, albeit younger than she would be by the time that television show rolled around.

The story is about a group of extreme revolutionaries that steal some high grade military shit and start terrorizing the town. There is a subplot featuring black militants, as they are set up by the mayor’s people to take the fall. This is also done to give credit to Harry and his new female partner, which the mayor uses to “prove” that his feminist cop initiative is a success. Of course, this doesn’t sit well with Harry or the female cop, especially since Harry worked out a deal with the leader of the black militants minutes before they were arrested.

As should be expected, this is an action heavy film and it moves at a much better pace due to its shorter running time. I like the bad guys, the subplots, Harry is still Harry, Tyne Daly is really good and I dug the finale, as it takes place at Alcatraz.

Sadly, Tyne Daly gets killed in the end, which was predictable but also cost the series a really good co-star. Her chemistry with Clint Eastwood was good and I really wanted to see her grow over the course of future films.

Rating: 8/10
Pairs well with: the other Dirty Harry movies, as well as the Death Wish series. 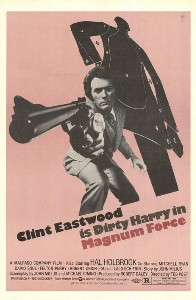 “You’re a good cop, Harry. You had a chance to join my team, but you decided to stick with the system.” – Lieutenant Briggs, “Briggs, I hate the goddamn system! But until someone comes along with changes that make sense, I’ll stick with it.” – “Dirty” Harry Callahan

Although, John Milius considered this the worst film he was involved with, I consider it to be fucking badass and a worthy sequel to the original Dirty Harry, as it builds off of some of the statements from that film and really examines how broken the justice system is from a cop’s perspective.

While this isn’t quite the classic that the original was, it is still a high octane, balls out action film with a certain kind of grit that could only exist in the 1970s.

Clint Eastwood is back as “Dirty” Harry Callahan and even though he tossed his badge in the river in the previous film, he’s back to work, crossing the line and fighting the scumfucks of San Francisco. In this film, however, the scumfucks just happen to be fellow police officers that operate like a team of Punishers.

The film is just as much a thriller as it is an action picture and it almost feels kind of noir-ish in its narrative tone, as there are swerves and twists. While you might see some surprises before the film reveals them, they’re still effective and make this an interesting story about corruption and justice.

Eastwood seems more fine tuned as Harry in this film and it’s obvious that he’s real comfortable in the role. Hal Holbrook plays opposite of Eastwood in a lot of scenes and I really enjoyed the banter between the two stupendous actors.

The film also features a young Robert Urich, as one of the dirty cops. It’s cool seeing him in this early role, as a piece of shit, especially since he typically played good, mostly moral characters as he got bigger roles and established himself as a really likable actor.

This is the longest film in the Dirty Harry franchise but there really isn’t a dull moment and time doesn’t feel like it’s wasted. This has a bulky story with a lot of layers to it but it’s easy to follow and moves at a good pace.

Ultimately, the film delivers where it needs to and the finale was really well done, as Harry has to outwit and survive the young killer cops that are determined to silence him.

Rating: 7.75/10
Pairs well with: the other Dirty Harry movies, as well as the Death Wish series. 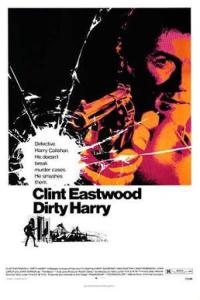 “Uh uh. I know what you’re thinking. “Did he fire six shots or only five?” Well to tell you the truth in all this excitement I kinda lost track myself. But being this is a .44 Magnum, the most powerful handgun in the world and would blow your head clean off, you’ve gotta ask yourself one question: “Do I feel lucky?” Well, do ya, punk?” – Harry Callahan

Going through my list of film series I haven’t yet reviewed, I was surprised when I came to the realization that I hadn’t covered Dirty Harry yet, as it is one of my favorite action crime franchises. Plus, it stars the always badass and intense Clint Eastwood, as the greatest character he ever played after “The Man With No Name” from Sergio Leone’s The Dollars Trilogy.

This also stars Andrew Robinson as the purely evil Scorpio Killer. He’s a guy that I love in just about everything and a solid character actor that, frankly, should’ve been in many more movies.

The story follows “Dirty” Harry Callahan as he tries to take down the Scorpio Killer, who has been using a sniper rifle to pick off his victims throughout San Francisco. What I like about the bad guy is that he is just a severely fucked up piece of shit and more like a force of nature than someone with a real plan. He creates fear and panic and in an effort to take him down, Harry skirts around the rules and takes the law into his own hands. This backfires on Harry, as even after he takes down Scorpio, the guy is released because of legal red tape. Ultimately, Harry says, “Fuck all this shit!” and he doubles down, finally killing Scorpio and then throwing his badge into the river as the ultimate “fuck you” to the system.

Dirty Harry is definitely a film of its time, similar to Death Wish, which would also spawn four badass sequels. These movies were a critique in rising crime rates in the U.S. and the inability of the police and the legal system to clean up the streets and make the public feel safer. Movies like these wouldn’t fly today due to society being so sensitive and butthurt over everything. Hell, look at the total shithole San Francisco has become in 2020. It’s not as violent but the West Coast softies let bums shit in the streets and throw dirty heroin needles all over the place.

From a technical standpoint, this movie is meticulously shot with superb shot framing and cinematography. All of the scenes atop buildings are fantastic and give you a true feeling of scope and distance, especially in regards to how the sniper sees things from above, searching for his victims.

I also like all the dark and gritty parts. The big fight in the park underneath the giant cross is a real highlight in all the things I just mentioned about the film’s visuals.

The action is also captured tremendously well from the early street shootout to the rooftop shootout to the confrontation in the park at night to the bus scene and the final showdown.

The picture is well written with good pacing and it has more energy than most films from the time.

Dirty Harry is just a great action thriller that features a character that deserves his legendary status. And just like with Death Wish, I was fine with nearly a half dozen sequels even if the quality started to wane.

Rating: 8.75/10
Pairs well with: the four other Dirty Harry films, as well as the five original Death Wish movies.