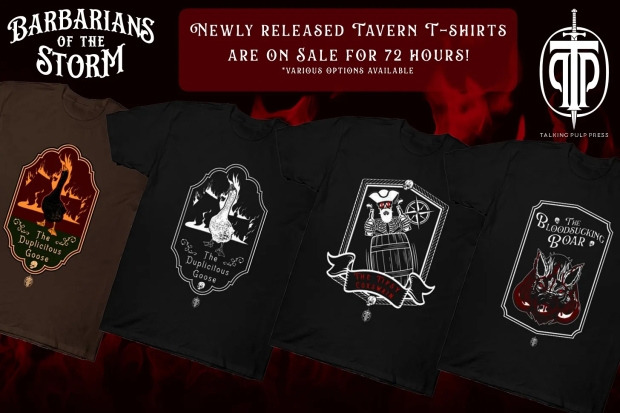 I have been MIA on here for a week, as well as having limited time on social media. I’ve been crushing out the final story in the upcoming anthology book Eyes In All Shadows. As of right now, I have one chapter left to write and then I move on to the final phase, which is proofing and editing everything one last time.

Additionally, I have launched a Talking Pulp Press storefront on Teepublic. (see here). I launched it last Friday with shirts and other merch featuring the Talking Pulp Press and Barbarians of the Storm logos. However, over the weekend, I worked on several other designs. Check the store out to see what’s there.

Today, I finalized the shirts that feature the sings for the taverns featured in the book series. Those are all on sale for the next 72 hours. There are also shirts featuring the book covers, as well as the promo art I’ve made for each story in the upcoming Eyes In All Shadows books.

Next up, I will start working on the flags for the different kingdoms in my stories.

For now, that’s it. I’ve still got a lot of other stuff to work on, as I move into the next phase of the Barbarians of the Storm franchise.

So, check out the shirts, the other merchandise, and get ready for Eyes In All Shadows, as it is getting really damn close to release.