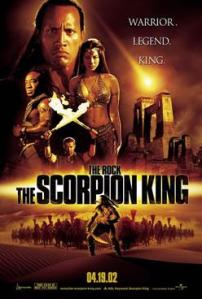 “Let me tell you, after a hard day of looting and pillaging, there is no greater city than Gomorrah… except maybe Sodom.” – Arpid

This was the first ’90s Mummy-related movie that I didn’t see in theaters and that’s mainly because it just didn’t interest me, even though I love The Rock and I love sword and sorcery flicks.

I was just turned off from how bad the Scorpion King character was presented at the end of The Mummy Returns and the trailers for this looked terrible.

Visually, I thought that this looked more like a TV production that had more in common with The Beastmaster TV show than something epic and cool like 1982’s Conan the Barbarian or the original and awesome Beastmaster movie.

I wasn’t wrong, as the finished product does feel like a television level production and that’s just one problem with it.

Beyond that, the story is cookie cutter shit. You never care about any of the characters or their situations in the film and that’s kind of an amazing feat, as Dawyne “The Rock” Johnson is one of the most charismatic people on the entire f’n planet. But somehow, this made him come off as boring and uninteresting.

I also never liked Steven Brand as the villain, as he just didn’t look like a guy that could remotely be a threat to The Rock. In the movie, his character is smaller and he’s just a dude that’s really good with swords.

I truly wish that this would’ve been The Rock’s Conan and that we’d get sword and sorcery movies with him in it every few years. However, this is a dud in every way.

But hey, at least it was better than that third Mummy movie.