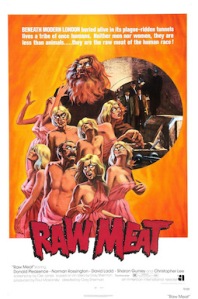 As regular readers probably already know, I’m a pretty big fan of both Donald Pleasence and Christopher Lee. So seeing them in the same film is obviously a treat. What’s odd about this one, though, is that I didn’t really know anything about it until very recently.

After seeing this, I find the fact that I didn’t know much about it to be kind of odd, as it’s a really unique movie, pretty damn dark and terrifyingly plausible.

I think part of the reason why this wasn’t on my radar much earlier was because in the United States, it was released with the title Raw Meat, which is pretty exploitive. Being that American International picked this up for distribution in the States, I’d assume they changed the name to try and capitalize off of the growing exploitation film craze. Ultimately, however, this probably hurt the film on a more mainstream level. Also, the title isn’t in any way an accurate one. And neither was the US poster.

The film is almost like a Phantom of the Opera story but instead of an opera house, this phantom haunts the underground subway system of London. He’s basically a homeless person with severe mental issues, who abducts people waiting on subway platforms at night. Once he has them, he keeps them prisoner and never releases them. There’s actually a disturbing, slow reveal of his lair, which is littered with dead bodies, all at different levels of decomposition.

Donald Pleasence plays a very cantankerous detective, who is on the case of the missing people in the subway system. The cops, in general, are pretty ineffective and don’t believe the wild tales of some sick hobo stealing people. They never really solve the case and are just lucky enough to hear the main girl screaming at the end, which leads to them taking down the film’s villain. Granted, he makes a noise just before the credits roll, alerting the viewer that he’s still alive despite the cops assuming he’s dead.

Christopher Lee appears in just a single sequence and it’s not even something that’s necessary for the film. I guess Lee always wanted to work with Pleasence and a single scene character was written into the story just so the filmmakers could capitalize on having Lee and Pleasence share some lines with one another.

I think that the most effective thing about the film is the atmosphere. The film successfully makes the London subway system of the ’70s look like a terrifying labyrinth of unsettling mystery. It’s definitely not a place one would want to find themselves alone at night.

Ultimately, this is a better picture than I assumed it would be. That being said, I’m surprised that this hasn’t amassed more of a cult following over time. It’s not something that I’ve heard many people mention in old school horror circles. But I’m glad that I found it, watched it and was able to maybe shine a light on it for other people.