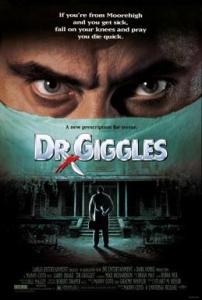 I remember how hard the studio was marketing Dr. Giggles when it was coming out. Being that I was in 8th grade, at the time, I didn’t see it in the theater and just planned to wait for it to come out for rental on VHS like most horror movies when I was that age. However, it came and went and I never did rent it.

So nearly thirty years later, I finally checked it out.

To start, it’s not very good. But it’s also not terrible. It’s very middle of the road, predictable and doesn’t make a big enough mark to warrant a film series like so many other slashers with unique villains that came out over the ’80s and ’90s.

That’s not a knock against Larry Drake, who plays the title character. Drake is a multi-time Emmy Award winner and a talented actor in the right role. I’ve always liked him in movies where he’s the villain like the Darkman series or when he’s just simply in a horror movie like Dark Night of the Scarecrow.

Drake really got to shine as the focal point of this picture and he was superb at being creepy. His laugh was great and unique. His character also had a decent backstory, capped off by an incredibly well-crafted scene where the child Dr. Giggles emerges from the womb of his dead mother in the morgue. It’s actually the highlight of the film, if I’m being honest.

The rest of the cast is pretty bad, even if the movie has some notable people in it like a young Holly Marie Combs, Colin Quinn, who played Mark on Roseanne, and Cliff DeYoung, who I will always have a fondness for because of his role as the dad in The Flight of the Navigator. The movie also features Doug E. Doug before he’d become better known in Cool Runnings and Cosby.

Apart from those actors, the rest of the cast is abysmally bad and it drags the movie down, as it relies on throwaway caricatures and tropes for these characters.

This is a forgettable movie and that’s probably why people forgot about it immediately after its release in 1992.