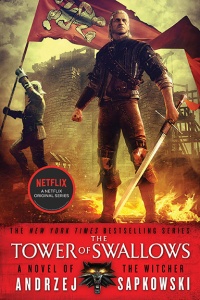 Man, this series doesn’t seem to be dropping off or getting stale.

This is the fourth book in the regular saga of five novels but it’s the sixth if you read the two prequels of short stories first, which is recommended.

This picks up where the previous book left off.

Ciri has to deal with the murder of her group of friends while also seeking answers to who she is, what her destiny is and what needs to be done to conquer the evil that keeps finding its way into her life.

Additionally, Geralt is with the same group he was with at the end of the previous story. They’re travelling with the queen and her army, who they fought alongside with. However, Geralt wants to locate a group of druids he believes can help lead him to Ciri.

Like the previous books, this one is really driven by the drama and the relationships of the characters and how they handle the hardships they face. It also has a good amount of action and high stakes.

This is the beefiest novel to date but it still reads like a breeze.

I found it hard to put down but luckily I read the bulk of it on flights to and from Vegas from Florida. It made that time pass pretty quickly in those tiny, uncomfortable ass seats.