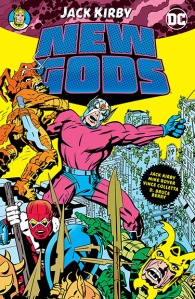 I had never read New Gods even though I’m a big Jack Kirby fan and especially of his Mister Miracle stuff at DC and The Eternals series he created late into his Marvel career. New Gods ties to Mister Miracle and the cosmic side of DC, much of which Kirby created, and it also resembles Marvel’s Eternals. But for some odd reason, it never really appealed to me enough to read Kirby’s original run.

Now that I have, I’m somewhat underwhelmed by it.

Comparing it to Mister Miracle, New Gods lacks its spirit and jovial, optimistic nature. Comparing it to The Eternals, it seems like a proto version of what that other series would become. Frankly, I think that The Eternals did everything better and felt more fine-tuned and focused. New Gods starts off well but each issue feels kind of random.

The only things that I really enjoyed with it story-wise, was the stuff that dealt with Darkseid, Kirby’s greatest DC creation, and the first appearance of Steppenwolf, who was very different than what moviegoing DC fans know from the Justice League movie.

As with all things Jack Kirby, however, I really enjoyed the art. Granted, he didn’t do all of it but everything within this thick omnibus was done in his great, old school style.