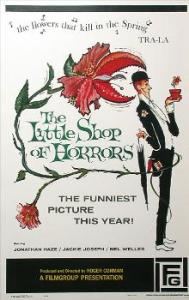 “It’s a finger of speech!” – Mushnick

I often times come across people who don’t realize that there was an “original” version of The Little Shop of Horrors that existed before the ’80s movie and the stage interpretations. And since it was made by the great B-movie king, Roger Corman, it’s always something worth pointing out.

The origin of this movie is kind of cool, as Roger Corman was challenged to beat his previous record of filming a movie quickly and with that, set out to film this entire picture in two days. A big part of that two-day window was that he wanted to re-use sets from his movie Bucket of Blood before they were torn down. He succeeded.

The film features a few Corman regulars, most notably Jonathan Haze, as the film’s lead, as well as Dick Miller and Jack Nicholson, in what was his most bonkers role, early in his career. Nicholson actually plays a dental patient that loves pain, which was the same role that Bill Murray played in the ’80s musical remake.

Now this version isn’t a musical like the ’80s film and the stage productions. However, it features a cool musical score by Fred Katz and an uncredited Ronald Stein. I like the odd score so much that I actually own it on vinyl.

I think that the most impressive thing about the movie is the special effects. The fact that they were able to create Audrey, the giant, man-eating plant and utilize it so well for this quick shoot is pretty astounding. But then, Roger Corman continually astounded with how quickly he shot his films, the sheer volume of them and how he pinched his pennies while getting the most out of them.

The Little Shop of Horrors is really no different than Corman’s other horror and sci-fi productions of this era in his career. And the end result is an enjoyable, quirky picture that is fun to watch or revisit every couple of years.

Rating: 6.5/10
Pairs well with: its ’80s musical remake, as well as other early Roger Corman pictures.