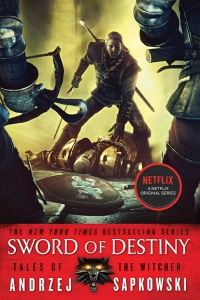 Sword of Destiny is the second of The Witcher‘s short story collections, which serve as prequels to the regular novel series. These books give more backstory and context to the core characters and help build out the world that they live in. If you want to get into this series, I’d suggest starting with these.

Like the other short story collection, which I already reviewed, some of the material here was used for episodes in the first season of The Witcher Netflix series. There are a few fresh stories, though, and the literary versions of these tales are actually better with more plot and details.

The most important story here is the one that covers the fall of Cintra and how Ciri lost everything and eventually found her way to Geralt, her destiny (and his).

Ciri’s journey to Geralt is actually covered in the two short stories at the end. However, it’s much richer and more detailed than the television series, which also appears to have made up some of its own details. Granted, some of those things could pop up in later literary stories that I haven’t read yet.

The other stories in this are all pretty entertaining but they do seem less important than the last two. Still, they all add greatly to the mythos and give you a great sense of these characters before you even get to the first regular novel.

Rating: 8.5/10
Pairs well with: the other Witcher books, comics and television shows.