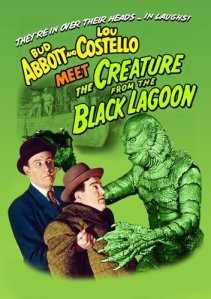 I bought this pretty sure that it had never actually been a movie. I was right. But considering that I love the Gillman more than any monster to come out of the Universal Monsters franchise, I had to buy it.

Plus, I also love Bud Abbott and Lou Costello and every time they cross paths with horror icons, it makes for really good results.

This is actually an episode of the comedy/variety show The Colgate Comedy Hour, which was a very early variety show in the earliest days of television.

You have to sit through about forty minutes of comedy skits, interviews, ice skating and dancing routines but you do eventually get to the section that stars Abbott and Costello.

Their segment is less than fifteen minutes and while it is rather funny, it only features the Gillman for maybe five seconds. The segment actually features more of Frankenstein’s Monster than it does the “creature” from the Black Lagoon. While that’s underwhelming and disappointing, the skit is still funny.

I wouldn’t call this a waste of money, by any means, as it was like five bucks. However, it’s packaging and title are pretty misleading and I can see where most people will end up with a product that pisses them off. For me, it’s just some weird novelty that’s been added to my classic horror collection.

Rating: 6/10
Pairs well with: the Abbot and Costello monster movies.