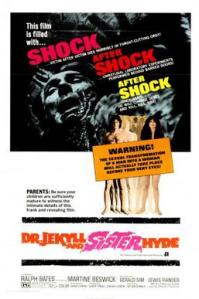 “I walked the streets, brooding on the bitter irony that all I wanted to do for humanity, for life, would be cheated by death… unless I could cheat death.” – Dr. Jekyll

This is strangely a Hammer horror film that I hadn’t seen. It’s always cool seeing one of these for the first time because it’s like looking at it with fresh eyes without nostalgia grabbing hold and taking you back to a magical time from your youth.

That being said, I quite enjoyed this and the gender bending twist to this classic story was a fun, interesting take.

The plot sees the legendary character of Dr. Jekyll develop and test out his own serum. However, in this version, he doesn’t turn into Mr. Hyde, he turns into a hot chick.

With that, his female persona uses her beauty and her gender to trap women in her web before horrifically murdering them Jack The Ripper style. In fact, this was most definitely inspired by the Jack The Ripper killings, as much as it was inspired by the famous Robert Louis Stevenson horror story about the duality of man and science run amok.

I love Ralph Bates, especially in his Hammer movie roles. I really liked Martine Beswick, as well though, as she plays the murderous female version of the character.

Additionally, whoever cast this film did a stupendous job in finding two leads with a very similar look despite their different genders.

Dr. Jekyll and Sister Hyde may not be the best version of the Stevenson tale but it’s certainly a really cool take on it, made by a solid classic horror director and two leads that committed to their parts and ultimately gave us cinematic magic.

Rating: 7.25/10
Pairs well with: other Hammer horror films of the early ’70s that explore sexual themes.