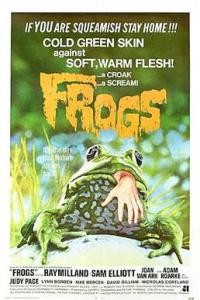 “I still believe man is master of the world.” – Jason Crockett, “Does that mean he can’t live in harmony with the rest of it?” – Pickett Smith

After revisiting this for the first time in a few decades, I was surprised to see how many different animals this film featured. Honestly, it shouldn’t have been titled Frogs. They should’ve called it Swamp Critters or Florida On A Tuesday, as it reminded me of a regular afternoon hike in my home state.

This movie is weirdly drab, even though it’s pretty eventful and features a lot of zany deaths. I wouldn’t say it’s boring but it does feel like the filmmakers barely took this seriously and tried their best. It certainly feels like a rushed production where they had x-amount of hours to film in a Florida State Park, so everything had to be done in a few takes: perfect shots, good effects and attention to detail be damned!

Now I did enjoy a very young Sam Elliott in this and I actually forgot he was the hero of the story. His environmentalist banter with the evil capitalist played by Ray Milland was enjoyable and it was cool seeing these two legends ham it up and try to turn this shoddy production into a film with a meaningful message. There are just so many other films that tell the “science run amok on nature” story much better, though.

This had the makings of something that could’ve been much better in an era where animal horror was really popular. However, for every Jaws you get ten Night of the Lepus.