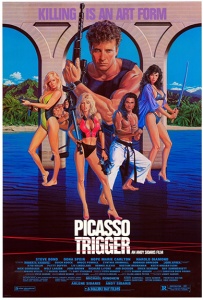 Picasso Trigger is the third of the twelve films in Andy Sidaris’ Triple B Series. Like all of the other movies in the series, it features hot chicks, often times naked, as well as tough, cool dudes, lots of guns, lots of explosions and a fun, goofy spy thriller plot that is one part James Bond, two parts Charlie’s Angels and ten parts awesome.

This one features some returning actors playing returning characters. I was definitely glad to see Harold Diamond back, as he is one of my favorite actors in these sort of films.

If I’m being honest, the plots to these films don’t really matter and you don’t really need it to get in the way of the overall spectacle.

I liked this almost as much as the previous film but I’d have to say it’s a slight step down. I think that one took the edge because it had a few awesome bazooka scenes. Although, this one features a dude getting blown to pieces by an exploding boomerang thrown by a hot chick.

Picasso Trigger is pretty much more of the same but honestly, when the same is pretty damn enjoyable, what’s not to like? Plus, each movie gives us new babes and more creative action sequences.

Rating: 6.25/10
Pairs well with: the other 11 films in the Triple B Series by Andy Sidaris, as well as the American films of Amir Shervan.