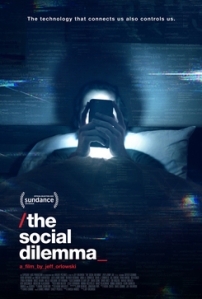 “How do you wake up from the Matrix when you don’t know you’re in the Matrix?” – Self – Google, Former Design Ethicist

I watched this based off of a recommendation and honestly, I probably wouldn’t have, otherwise. I’m glad I did though, as it was really refreshing seeing some of the people who were instrumental in developing social media, kind of condemning certain parts of it, as it’s now being used in a way to create an addiction to it and to further divide the people using it.

Initially, it was created to bring people together, where they could interact with one another, all over the world. Where they could share ideas and more or less, come together in a positive, constructive way in an effort to shape a better planet.

In the last decade or so, all of that has started to take a turn for the worse.

This film breaks down how this happened and how it all works. Frankly, it’s kind of scary but it’s also not like most of us sane, rational people aren’t aware of it. There’s a reason why I stopped using Facebook, only occasionally touch Instagram and pretty much just use Twitter to promote this site and then shitpost.

This also has some bits in it where actors play characters being affected by all of this. It’s used to illustrate in an interesting way how social media can destroy relationships and human interaction. It also shows how these apps work and why they hone in on our different triggers to sell products and to keep us engaging with the app.

I can’t say that anything here was new information but it’s refreshing seeing the architects of the problem try to combat it and bring more awareness to it.