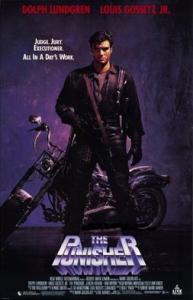 While I know that this isn’t as good as the 2004 Punisher movie, this is still my favorite film of the lot and Dolph Lundgren really embodied the version of Frank Castle that I envisioned as a kid in the late ’80s, just discovering Punisher comics.

I loved the fuck out of this movie when I saw it in 1990, once it hit video store shelves in my area. I would’ve loved to have seen it in the theater but I lived in a small town with small theaters that played it safe, didn’t take risks and have now mostly been replaced with better theaters offering more variety… and alcohol.

Dolph Lundgren is just fucking perfect in this and nothing else about the film really matters. Sure, I like Louis Gossett Jr. but he’s kind of a non-event in the picture, as is everyone else, except the mob boss turned vigilante that helps the Punisher fight ninjas in an effort to rescue his kidnapped son.

This wasn’t made by Cannon, it was in fact made by New World, but it has that Cannon vibe to it albeit with an even cheaper budget. Still, its a solid mix of gritty, ’80s action, a badass hero and more ammo wasted than an Argentinian coup.

One sequence that really stands out is where we get to see the Punisher battle a hoard of machine gun ninjas in a decrepit carnival funhouse. Granted, I also loved the big finale that saw our hero and the mobster douche machine gun the crap out of ninjas.

All in all, this is just a badass flick with uber amounts of testosterone, one of the best, most physically intimidating action stars of all-time and it feels true to the source material. It’s certainly better than everything that came after that Thomas Jane Punisher movie.