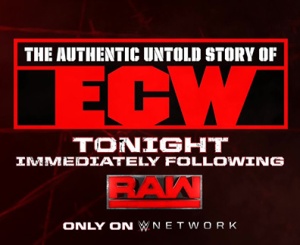 I wasn’t sure what this was when I fired it up on the WWE Network but then I immediately realized that I had already seen it back when it aired.

It’s not a traditional documentary, as much as it is a one-off interview show with a panel of ECW (Extreme Championship Wrestling) legends talking about their time in the promotion back in the ’90s and very early ’00s.

Overall, for old school ECW fans, this was a worthwhile watch that felt pretty honest and unfiltered. It features the Dudley Boyz, Tazz, Tommy Dreamer and ECW boss, Paul Heyman.

Each guy told stories about the heyday of ECW and went through a bunch of topics.

This is kind of a nice followup watch to the WWE’s superb documentary, The Rise and Fall of ECW.

However, for those who aren’t familiar with ECW and don’t already have a love for it, this probably doesn’t offer up much that would be considered engaging or entertaining. Although, if you’re a fan of wrestling history, you’ll probably find this interesting, regardless of your feelings on ECW.

Rating: 6/10
Pairs well with: other WWE Network exclusives and documentaries.