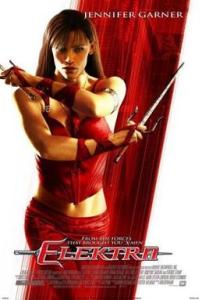 “I like your bracelet, by the way. Do you know what those are? Here. They’re warrior beads. They’re from Indonesia. Centuries ago, you had to be the best fighter in your village to earn them.” – Elektra, “Wow. I bought’em off eBay.” – Abby Miller

I never wanted to see this because the trailer was a complete turnoff that made this film look like absolute schlock of the highest and worst caliber. Not good, cheesy schlock but the kind that’s so drab and pointless that it’s shocking it even got a theatrical release and wasn’t used to torture terrorists.

Having finally seen this, I wasn’t wrong. This is definitely a terrible movie, littered with atrocious special effects, generic and lifeless characters, as well as wasting the talents of the few good actors in it.

What’s even worse is that this doesn’t feel like it belongs in the same universe as 2003’s Daredevil, which was a pretty decent movie if you watch the Director’s Cut instead of the theatrical version. Hell, even Ben Affleck filmed a cameo scene to tie them together and for whatever reason, it was cut from the final version of this film.

What this does feel like is a made-for-TV SyFy movie of the week. It’s duller than a plastic knife left too close to an open flame with about as much personality and charm as a lobotomized sloth.

The only real silver lining in this is that Jennifer Garner looks absolutely stunning. But she’s always pretty stunning and one shouldn’t have to suffer through this deplorable production just to see her kick the shit out of people while being super hot.

Elektra is bad, really bad. I mean, I guess it’s better than 2004’s Catwoman but at least that film had some memorable moments. Everything in this film is completely forgettable.