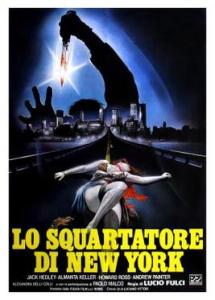 Not all Lucio Fulci movies are created equal. Some are very good and some are not so good. This one falls somewhere in the middle but actually gets some extra credit points for its ending, as I thought it was a good double twist that I didn’t see coming.

Anyway, this is pretty much a perfect marriage between giallo and slasher but it’s much grittier than a standard, vividly colored giallo. Maybe that has to do with it taking place in New York City and Fulci was trying for a Martin Scorsese aesthetic. But honestly, his giallos have never been as colorful as Argento’s or either Bava’s.

This is a really violent film that mixes gore and sexploitation in a way that only an Italian director can properly do. It has some seriously gruesome moments akin to that infamous eye scene from Fulci’s Zombi 2. One in particular sees the mysterious killer cut and torture a naked woman while laughing at the police over the phone, as they fell for his ruse and failed to stop him.

The killer is also interesting in how his serial killer personality talks like Donald Duck. He boisterously quacks between his threats like a sadistic, evil cartoon character and while that may sound kind of hokey, it’s actually effective and pretty unsettling.

Overall, this is pretty straightforward for a giallo or an urban slasher flick. It adds in a lot more sex stuff than average but I wouldn’t call any of that shocking. The only thing really shocking and pretty unnerving is the gruesomeness of some of the kills.

For whatever reason, this film is pretty highly regarded by die hard Fulci fans. I don’t think it’s a classic of the genre like many do but it’s certainly worthwhile for fans of similar films.

Rating: 6.75/10
Pairs well with: other Lucio Fulci horror movies, as well as Maniac and The Last Horror Film.