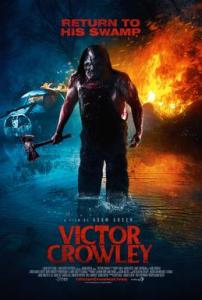 After seeing Hatchet III, several years ago, I thought that the film series really ran its course and went out with a pretty decent bang. I didn’t think I really wanted another one, then a few years later, this one came out, which I slept on. I intended to eventually watch it but then it slipped down the memory hole until it was featured on an episode of The Last Drive-In with Joe Bob Briggs.

I’m glad that Joe Bob hosted this, though, and that he also brought in writer/director/creator Adam Green, as well as a lot of the cast, to discuss the film, the franchise and its possible future.

I love Kane Hodder, so anytime the guy can get some solid horror work, I’m happy. He deserves to work as long as he wants to and since they aren’t making Friday the 13th movies anymore, this is the next best thing. Especially, since the character of Victor Crowley gets to use Hodder’s talents and then turns them up to eleven, allowing him to go ape shit crazy and express himself in stark contrast to the more reserved, quiet Jason Voorhees.

For the most part, this is a decent sequel in the same vein as the other films. It sees a plane crash in the swamp near Crowley’s home. Also, there is a filmmaking crew out there, trying to make a film about Crowley. The two groups converge and end up holed up in the crashed plane, trying to survive the night with the uber-violent Crowley outside.

The film is pretty straightforward and even though it’s a self-aware “wink at the camera” horror film, it’s never annoying about it like most modern horror flicks that try to do the same tired ass shit. This is one of the reasons why modern horror is crap but at least Victor Crowley doesn’t contribute to that problem and actually shows that you can be self-aware and not be a total douche about it.

Ultimately, I liked this movie and I think Adam Green has a really good grasp on his creation and how to traverse through the modern horror world where the competition is lackluster, redundant and uninspiring. While I can’t call his movies game changers, they at least give audiences something new and fun and don’t fall victim to the same, lame modern horror tropes.

Rating: 6/10
Pairs well with: the other films in the Hatchet series, as well as other slasher films, specifically the Friday the 13th movies with Kane Hodder as Jason.