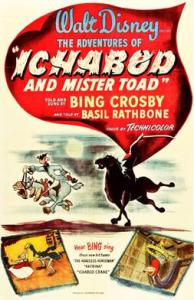 This is the sixth and final movie in Disney’s string of anthology/package films, ending their strange and very different approach to feature length animated productions in the 1940s.

Overall, this is my favorite film in this strange stretch of pictures, as it feels more like traditional Disney storytelling, as it only features two stories and both are done quite well and exhibit that Disney storytelling magic better than anything else out of the package film releases.

I really like both of these stories and both were favorites of mine, as a kid. However, I’ve never seen them presented in this full film version and usually just saw them used separately as filler to take up time between movies on the classic ’80s version of The Disney Channel, back when it was a premium cable channel that had to be subscribed to similar to HBO and Showtime.

This movie actually feels like the people at Disney were already planning on returning to feature length storytelling but they had to do this to get their mojo back and to learn how to tell a longer story, once again.

This film is made by two different teams, each focusing on their half of the film.

The two stories here are adaptations of two different books: The Wind In the Willows by Kenneth Grahame and The Legend of Sleepy Hollow by Washington Irving. The former makes up the Mr. Toad portion of the film, the latter makes up the Ichabod story.

I think what I liked about these stories was that they were just amusing and fun. I loved the spirit and tone of the Mr. Toad segment but then I really fell in love with the Ichabod half because of its finale with The Headless Horseman, which is still, in my opinion, one of the greatest finale sequences that Disney has ever done.

Seeing this now, the animation really stands out and it’s clear that over the course of these six experimental anthology pictures, that the Disney company really honed their skills in a variety of ways. In this film, applying these more refined skills, we’re treated to a picture that looks better than most of the work that Disney has done previously in regards to their standard animation style.

This is more fluid, the action and motion is just more dynamic and the two sequences just blend together nicely, even in spite of their very stark narrative and style differences.