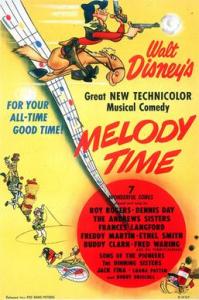 “In the state of Texas, USA, life still goes on in the same old way.” – Roy Rogers

Melody Time is the fifth of the six Walt Disney anthology/package films of the 1940s. This one is also a lot like Make Mine Music in that it mostly focuses on a series of musical numbers.

I’d say that this one is a bit better than Make Mine Music, as it features some live-action actors interacting with animated characters. Although, I don’t think that it’s as groundbreaking as The Three Caballeros in that regard.

While I appreciate these films, I much prefer the anthologies that feature stories or educational bits like Fun and Fancy Free, Saludos Amigos and The Adventures of Ichabod and Mr. Toad.

The animation is really good, the voice acting is solid and overall, this is an energetic and amusing film with great music. But I think, by this point, the animated anthologies were starting to get redundant and tiresome.

Luckily, Disney fans in 1948 were only two years away from the second great era of Disney animation with 1950’s Cinderella being just around the corner.