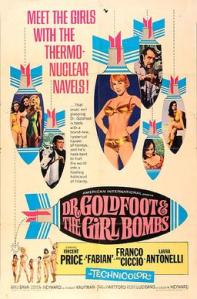 I haven’t seen this film in a long time and the two Dr. Goldfoot movies blended together in my memory. I was a bit intrigued to check this one out, though, as I noticed that it was directed by giallo and horror maestro, Mario Bava. He’s a director that has a fantastic style.

Sadly, this was a bit of a let down. That’s not to say that the first movie was great by any stretch of the imagination but it was entertaining and full of charming whimsy. This picture is a big step down.

I think that this may just be a problem with the American version of the film, however, as the jokes and gags don’t seem to land. This could be due to this being an Italian production, unlike its predecessor, and some of the humor got lost in poor translation.

The film does seem more concerned with showcasing gags than any sort of interesting, coherent story though.

I still enjoyed Vincent Price in this but his performance is weaker, overall, because he didn’t have his assistant from the first movie, who was a good goof for Price to play off of. They had good banter and decent chemistry but in this film, the new henchman barely speaks and just sort of follows orders.

The film’s humor is also goofier, as it relies pretty heavily on slapstick and people falling all over the place like a Benny Hill sketch.

Still, this isn’t a complete waste of time if you like ’60s era spy parodies and Vincent Price. He’s surrounded by a weaker cast but at least he’s still fun to watch when he gets to ham it up.

Rating: 4.5/10
Pairs well with: its predecessor, as well as the Dean Martin starring Matt Helms films.