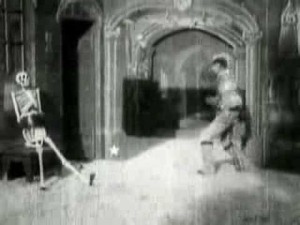 Is this the first horror movie ever made? Well, it’s probably the oldest one still in existence.

The film is important in the earliest days of motion picture history for it being what’s considered the earliest form of cinematic horror but even more than that, it’s use of special effects and editing are quite impressive for the time.

The House of the Devil came out when film was still a new, barely unexplored medium and those who were experimenting with it still found themselves inventing the techniques that would go on to expand the art form into the most popular artistic medium on the planet.

Beyond simple horror, this also bleeds into the fantasy and comedy genres. It features pantomimed sketches with a bat, a devil, a couple of cavaliers, a skeleton, spectres and other goodies.

It uses clever editing techniques to show the transformation of magical creatures and other monsters appearing like magic to confront the heroes.

The film is only three minutes, which is pretty normal for pictures from this era but it packs a lot into that short time and it’s a much more entertaining film that what was the norm.

Rating: 8/10
Pairs well with: other very early and experimental films.