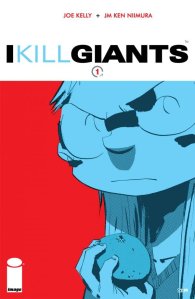 This came and went and I never knew about it until recently when I heard about the film that’s based on it. So before checking out the movie, I figured I’d read the source material first. Plus, it was pretty cheap to pickup on Comixology.

I wasn’t expecting the story to get as serious as it did but at the same time, it’s pretty comedic. Honestly, it has the tone of a manga story and since it also features manga style art, it’s a much more Japanese feeling comic than a Western one.

That being said, I was fairly impressed by it and even if it wasn’t my total cup of tea, I liked the idea of a young girl with a massive hammer kicking the shit out of parasitic giants out to harm her community.

While the main character is strange, she’s likable and for the most part, relatable.

This gets into some heavy things but I also feel like this would really be enjoyed by pre-teens, close to the same age as the kids in the story.

I liked the art, the tone was different and refreshing and the characters kept my interest. Plus, the story was a neat concept that was well executed.