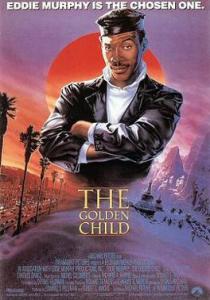 “Only a man whose heart is pure can wield the knife, and only a man whose ass is narrow can get down these steps. And if mine’s is such an ass, then I shall have it.” – Chandler Jarrell

The Golden Child is one of those movies you used to love when you were a kid but seeing it decades later leads to disappointment, as it doesn’t live up to your memories.

Now that’s not to say that this is a crappy movie, it’s just an overly hokey one that feels immensely outdated where the jokes don’t land in the same way they once did and for the most part, you’re just kind of waiting for it to wrap up.

Sure, Eddie Murphy is enjoyable in the film and I also always dig Charles Dance playing a villain but the story and its pacing were really sloppy.

This was a movie that did a lot of weird shit just to do weird shit. Frankly, I’m not sure why the villain’s henchmen were so goofy. I mean you have a guy that looks like a monkey for no real reason. Just save on some money and cut those facial prosthetic effects out of the film unless they serve some sort of narrative purpose other than creating a quick, bizarre gag that fizzled out almost immediately but then had to be stretched over the duration of the film. I’m also not sure why Randall “Tex” Cobb had to wear weird forehead prosthetics either.

Additionally, even though the effects work was handled by Industrial Light & Magic, the company born out of Star Wars, they aren’t very good, even for the time. I remember, even as a kid, I wasn’t all that impressed with the demon fight at the end. The flaws are also made more apparent by how the effects shots are all obscured by the immense glare of the sun or fake fog that exists in effects shots but then it’s absent when a shot cuts quickly to Eddie Murphy. But I can excuse it, as ILM was really experimenting with a lot of different special effects tech in an effort to get where they did by the time Jurassic Park rolled around seven years later.

In the end, this is a film that only really works because of Eddie Murphy’s charm. It’s strange and somewhat of a mess but if you have the nostalgia bug for this flick, it’ll probably still play okay. For those who have no memories or feelings about this movie, you might want to skip it.