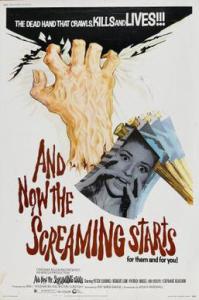 An Amicus horror film that isn’t an anthology? Oh, yes!

I’ve never seen this one, which is surprising, as it features Peter Cushing and Patrick Magee in it. It also stars a young Stephanie Beacham, who I loved in a TV show no one but me remembers anymore called Sister Kate.

This is the story of a newlywed couple who move into the groom’s mansion which is haunted due to a curse placed on it, following a terrible thing that happened on the property years earlier.

It’s fairly predictable but the story is solid with good layers to it. The film also benefits from better acting than pictures like this tend to have.

More than anything, I liked the creepiness of this and in that regard, it felt like it was on a different level than your standard Amicus fair.

I loved the effects, especially how they pulled of the severed hand that crawled across the floor. It looked real, effective and for the time, was damn impressive.

In the end, I can hardly call this a horror classic but I do like it better than most Amicus movies. And since that’s a studio whose output I really enjoy, I guess I was somewhat impressed by this.