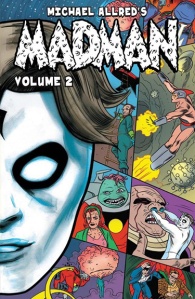 Michael Allred created something special, unique, quirky and cool with Madman. And since I own a lot of the floppies from the earliest issues, I’ve wanted to revisit them from the beginning. While I don’t have them all, I did pick up the collected editions during a sale on Comixology.

I really enjoyed the first volume, so I figured that reading the second one was long overdue.

This sort of picks up where that one left off and this collection covers multiple story arcs but everything here happens in order and builds off of the constantly evolving narrative.

These issues came out once the series moved from Tundra to Dark Horse. What’s cool about that is that this was able to have a cameo by Mike Mignola’s Hellboy. It’s really neat seeing the two characters come together, even though it just happens in one issue and is short-lived. I’m not sure if this series has anymore minor crossovers in the following volumes but I liked seeing Allred and Mignola’s universes overlap, even if it was just briefly.

The art in this one feels more crisp and more polished. The first volume was initially in black and white but this one comes to life with incredibly vibrant colors that just work so well with the line art and give this a cool, pulpy look that made it stand out from what was the norm in the ’90s when this was originally produced. That’s really what made me take notice of the original floppy copies back then.

In the end, this expands the mythos and made me love this world even more. This series is hilarious and strange in the best way possible.

Rating: 8.5/10
Pairs well with: the other early Madman collections, as well as SCUD: The Disposable Assassin, the Hellboy and B.P.R.D. comics and The Goon.