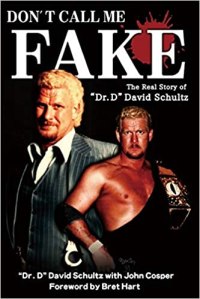 To say that “Dr. D” David Schultz is one of the most interesting guys that ever worked in the wrestling business might be an understatement. He’s most famous for being infamous but he also got pushed out of the career he loved and became one of the most famous bounty hunters in the United States.

His most famous act, still to this day, was slapping 20/20‘s John Stossel back in December of 1984 at Madison Square Garden. It’s the incident that changed his life and set him on a different career path outside of professional wrestling.

Schultz is much more complex and a lot more interesting than just being the cantankerous heel that hit a reporter, though. He’s actually a pretty badass dude, legitimately.

He was known as one of the toughest wrestlers in the locker room and he would go on to have a great career as a bounty hunter where he actually used that job to try and help those on the wrong side of the law. Despite his legendary reputation as a heel, David Schultz has actually helped people turn their lives around, whether just checking up on them or helping them escape very bad people.

This book tells Schultz’s story in his own words and man, it’s compelling stuff and, hands down, one of the best wrestler biographies I have ever read.

The first half of the book covers Schultz’s youth and wrestling career while the second half takes you through his bounty hunting career. Even though I bought this for the wrestling stories, I found the bounty hunting stories to be much more intriguing and captivating. The guy has lived one hell of a life.

Don’t Call Me Fake is incredible and I don’t know why this hasn’t been made into a movie yet.

Rating: 9.5/10
Pairs well with: other biographies and historical books written about old school wrestling from the territory era.