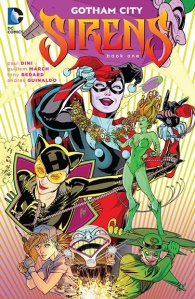 I didn’t know much about this series but I really like Paul Dini’s Batman work, especially what he did on the near perfect Batman: The Animated Series. I also like how he wrote Harley Quinn and Poison Ivy on that show and thought that Dini gave them a fantastic dynamic, as well as superb chemistry.

This series adds Catwoman to that mix and since Dini did well with her character on that animated show, it just seemed like another reason to give this a shot.

Even though I anticipated liking this, I was still surprised by how good it is!

This brings the three women together as roommates, as they try and keep each other on the straight and narrow path, trying to be reformed criminals doing a little good in the world. Of course, things can’t be that simple.

The Riddler also plays a big role in this, as he helps the women where he can. That is, until he feels betrayed and personally hurt by them towards the end of this volume.

This is a pretty thick collection of stories, as it includes the first thirteen issues of the ongoing series. Within that, it features several story arcs, all of which are pretty good. There isn’t a dull moment in this run of issues and I actually really liked the standalone Christmas story that saw Harley return to see her family.

Dini gives us a lot of info on the backstory of all these characters and shows how some of their stories had some overlap at different times, whether they knew that then or not. For instance, the moment Harley met Ivy, she also met The Joker. Both characters would have an immense effect on her life.

So much happens in this and all of it is good. I dug the hell out of it much more than I thought I would. I’m sure I’ll read and review the second volume in the very near future.