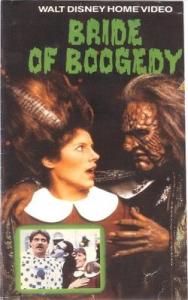 “[after stealing the magic cloak] So this is the secret of your success, eh Davis? Magic! Well two can play at that one my friend! When I’m through with you, you and your family will be sorry you ever moved to Lucifer Falls!” – Tom Lynch

I figured that I’d have to watch this after revisiting its predecessor a week or so ago. Plus, both are streaming on Disney+, which I re-upped to watch and review all the classic animated films.

This one is slightly better than the first but I think that mostly has to do with the fact that it is twice as long and actually the length of a regular film. An issue with the first one is that it felt rushed in its pacing, due to only having about 45 minutes to tell its story.

In this one, the filmmakers had more room to breathe and could tell a richer, more complete story.

I did miss Kristy Swanson and John Astin in this one but that was also off-set by the inclusion of Eugene Levy and a smaller part for character actor, Vincent Schiavelli.

The story sees Mr. Boogedy return after he’s essentially raised from the netherworld by a professional rival of the protagonist family’s father.

The film is primarily made up of gags and amusing sequences but there isn’t a whole lot in the picture that really matters. Everything is building up towards a big town carnival though.

At the carnival, Mr. Boogedy appears in front of everyone and steals the family’s mother away to be his bride. The family then has to find a way to pull her back into the real world while locking Mr. Boogedy away once again.

This film is cheesy and goofy but it’s also endearing, as you do care about the family and how positive and optimistic these people are, even after moving to a haunted house in a town called Lucifer Falls.

Rating: 6/10
Pairs well with: it’s predecessor and other episodes of The Magical World of Disney.