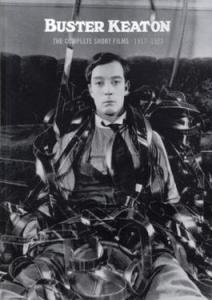 The IMDb description of this film is, “Buster Keaton shoes horses and repairs cars, with mixed results.”

That pretty much sums the whole thing up.

However, this is Buster Keaton and the gags and physical humor are great, even if this is still pretty early into his career where he was pumping out silent short films left and right.

While I don’t enjoy this one as much as One Week or Cops, it still showcases the man’s great talent and how he could make magic with just about any prop or situation.

This is only 25 minutes but a lot happens and Keaton doesn’t really stop moving, except to fill in a few narrative points between the physical scenes. But even then, he finds a way to put his physical energy to use.

In the end, I’ve never seen a Buster Keaton film I haven’t enjoyed and The Blacksmith is no different.

Rating: 7/10
Pairs well with: other Buster Keaton films of the silent era, as well as the movies of Charlie Chaplin and Harold Lloyd.