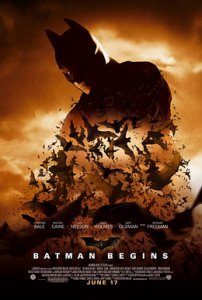 “But I know the rage that drives you. That impossible anger strangling the grief, until the memory of your loved one is just… poison in your veins. And one day, you catch yourself wishing the person you loved had never existed, so you would be spared your pain.” – Henri Ducard

When this first came out on DVD, I watched it almost weekly for a few years. I loved this film and to me, at least at the time, it was the greatest Batman film ever made. Hell, before the DVD release, I think I saw this at least three times in the theater.

I would end up liking The Dark Knight even more but the Nolan trilogy started with this film and it was a great introduction to his more serious and realistic Batman film series.

In retrospect now, I like the 1989 Batman slightly better but it’s magic was undone by the later films that followed and even though it took eight years, Batman Begins was the cinematic reboot that we needed after the Schumacher Batman pictures.

This film is so good, as are the ones that follow, that I’ve kind of accepted that no one will ever make a Batman film series as great. Frankly, these are the best films that Christopher Nolan has made and while the first film in a trilogy can often times feel like a practice run, this one is fairly close to perfect.

My only real gripe about it is that the pacing feels a bit disjointed at times. But there is also a lot of story and a lot of characters to balance here. I think that Nolan got much better with that in the next film. These aren’t things that break the film in any way but if I can’t give this a perfect score, I feel that I should explain why.

This is still energetic and every scene feels necessary. But it also feels like so much was wedged into it that it could’ve actually benefited from an extra 20-30 minutes. And that’s not something I’m usually a fan of, as I love 90 minute running times and this picture is already well over two hours. But when a film is this good, I never seem to mind that it requires more of my time.

Nolan got the best possible performances out of all of the actors involved and everyone in this is absolutely perfect. This was well cast and even Katie Holmes, who was replaced in the sequel, pulled off the best performance of her career. Normally, I wouldn’t put her at the same level as everyone else in this movie but she held her own and I was disappointed that she was recast in The Dark Knight.

In closing, this is a stellar motion picture where everything just works in the right way from the direction, cinematography, acting, the musical score by Hans Zimmer and the great character development.

Rating: 9.5/10
Pairs well with: the other two films in The Dark Knight Trilogy.