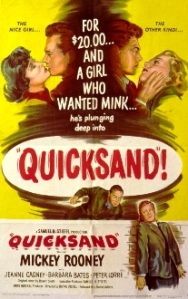 Quicksand was pretty highly touted in a few books I read on classic film-noir. However, I found it to be a bit pedestrian and drab.

Now the performances by most of the main cast were good, especially Peter Lorre, but Mickey Rooney was kind of a distraction, as I just didn’t find his character to be believable. That may also be because I’m watching this through modern eyes and I mostly only know Rooney through his work, later in his career.

It was just hard for me to buy into him in this but that’s also a moot point when the picture itself isn’t very engaging, has a really basic plot and also has really predictable twists and turns.

The film is also very short, which isn’t a big deal, especially with smaller noir productions of the time but there is such a lack of story that even with a scant running time, it feels like there are scenes that are too drawn out. It feels like the script was 60 pages and they tried their damnedest to stretch it to the length of a film with 80 to 100 pages.

Still, it’s not bad. It’s passable and fairly competent from a technical standpoint. There just isn’t a whole lot here to care about or sink your teeth into. There’s a hundred classic noir pictures that are better than this one.